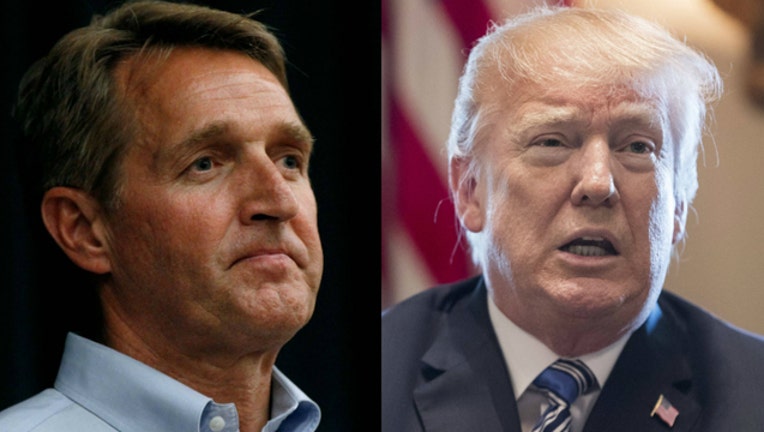 MANCHESTER, N.H. (AP) - Jeff Flake has a direct message for the Republicans of New Hampshire: Someone needs to stop Donald Trump. And Flake, a Republican senator from Arizona, may stand up against the Republican president in 2020 - either as a Republican or an independent - if no one else does.

"It has not been in my plans to run for president, but I have not ruled it out," the 55-year-old Flake said Friday in his first solo political appearance in New Hampshire. The state is expected to host the nation's first presidential primary election in less than two years.

"I hope that that someone does run in the Republican primary, somebody to challenge the president," Flake said. "I think that the Republicans want to be reminded what it means to be a traditional, decent Republican."

After attacking Trump in a speech that spanned nearly 20 minutes, Flake earned a standing ovation from the packed room that gathered for the esteemed "Politics and Eggs" speaker series at Saint Anselm College.

Flake is among a very small group of Republican elected officials speaking out against the Trump presidency with increasing alarm.

He has already written a book that slams Trump. He condemned Trump on the Senate floor and charged in a speech on Thursday at the National Press Club that his party "might not deserve to lead" because of its blind loyalty to Trump. By visiting New Hampshire, Flake is now declaring the possibility of another tactic: a 2020 primary challenge.

On the ground in the Granite State, a full year before presidential candidates typically begin courting local voters, there is already an expectation among top Republicans that Trump will face a challenge from within his own party in the next presidential contest. Yet few think Trump could be defeated, even under the worst circumstances.

Steve Duprey, who represents New Hampshire at the Republican National Committee, said: "It's virtually impossible to beat an incumbent for the nomination. But that doesn't prevent people from trying with various degrees of seriousness."

"I think there will be some primary," he added. "Whether it's a serious contender or a protest candidate that the president's team would have to take seriously, it's too early to tell."

Despite Flake's fiery pronouncements, he would start out as an underwhelming presidential contender on paper.

He is not well-known, he has little money of his own and a disdain for fundraising, and because he is retiring from the Senate at year's end, he has no political organization to help fuel his ambitions.

Flake has powerful friends who could help, however, including the outspoken anti-Trump billionaire Mark Cuban.

The billionaire, who is considering a presidential bid of his own, acknowledged that he doesn't know much about Flake's political ambitions. "But as a citizen of this great country, the more candidates for the office of president the better," Cuban said.

In an interview with the AP on the eve of his Friday speech, Flake acknowledged Trump was probably too popular among the Republican base to lose a primary in the current political climate.

"Not today, but two years from now, possibly. Things can unravel pretty fast," Flake said, suggesting that a disastrous midterm election season for the GOP could realign voter loyalty. "As soon as he's viewed as one who loses majorities in the House and the Senate, and there's no chance that someone in the 30s can win re-election, people might move on."

And if Trump's standing with the base doesn't fade, Flake would consider a presidential bid as an independent. As Ralph Nader and Ross Perot have shown, a third-party candidate can profoundly affect a presidential contest, even by drawing only a fraction of the general election vote in a few key states.

"I'm not ruling that out, either," Flake said. "There are going to be a lot of other people in the party looking for something else."

He continued, "If you end up with Trump on one side, (Bernie) Sanders or (Elizabeth) Warren on the other, there's a huge swath of voters in the middle that make an independent run by somebody a lot more realistic."

Trump has a special relationship with New Hampshire.

The state gave him his first victory of the 2016 Republican primary season. His political future was very much in question when he dominated the competition with 35 percent of the vote. Second-place finisher, Ohio Gov. John Kasich, who is also weighing a 2020 run, earned just 15 percent.

On Monday, just three days after Flake's visit, Trump is expected to make his first appearance in the state since winning the 2016 election. The visit was arranged after Flake's speech was scheduled. And Vice President Mike Pence is set to appear in New Hampshire later in the week as well.

"President Trump won because of his vision to make America great again, and we're confident that as he continues to deliver on the promises he made, voters will re-elect him in 2020," Smedile said.