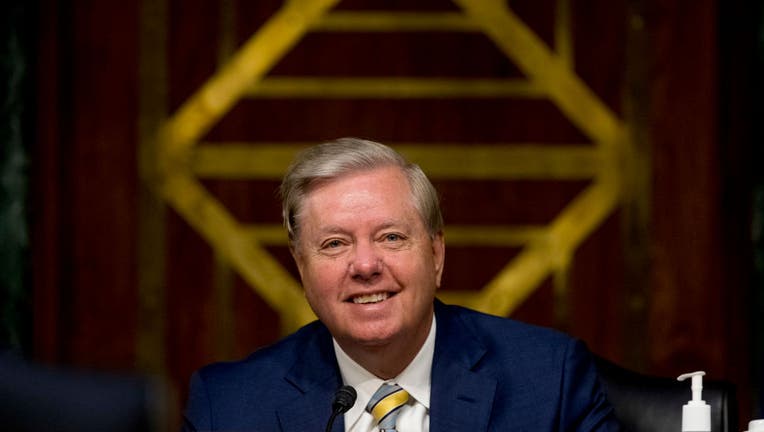 COLUMBIA, S.C. - In the next step of a race already on pace to become the most expensive in South Carolina history, U.S. Sen. Lindsey Graham has defeated three little-known GOP challengers, the last marker ahead of a general election face-off with Democrat Jaime Harrison.

Graham, 64, bested fellow Republicans Duke Buckner, Michael Lapierre and Joe Reynolds in Tuesday’s primary election. Harrison was unopposed in his primary, and two Libertarians and one Constitution Party candidate have also filed to seek the seat.

Graham’s popularity among Republicans in his home state has recently fluctuated along with his relationship to President Donald Trump, who is supporting his reelection bid and campaigned with him in the state in February. A year ago, all of South Carolina’s statewide-elected officials endorsed Graham, as has Vice President Mike Pence, who helped kick off Graham’s reelection campaign last year.

The 44-year-old Harrison, an associate chairman with the Democratic National Committee and former chairman of the South Carolina Democratic Party, has from the start aimed to draw national attention. That has helped him to spur the fundraising and grassroots organizing that is crucial to flipping a Senate seat in the deeply red state.

On Tuesday, Harrison congratulated Graham on his victory and expressed excitement for the general election campaign, saying in a news release that South Carolina voters are “fed up with Lindsey taking this seat for granted, and they are demanding a senator who will put their needs ahead of his own.”

Both Graham and Harrison have posted record-setting fundraising hauls in recent quarters. Over the course of the campaign, Harrison has raised nearly $15 million. Graham has taken in a total of $21 million, according to Federal Election Commission records.

The COVID-19 outbreak created some questions as to how Tuesday’s elections would be carried out. During one of their brief returns to the Statehouse, legislators passed a law allowing universal absentee voting because of the pandemic. A federal judge also temporarily removed a policy requiring that a witness sign an absentee voter’s ballot.

A slow but steady trickle of voters cast ballots in person Tuesday at a church in Lexington, South Carolina, where supporters of some local candidates said there was no line inside. Those wearing masks often took them off as soon as they left.

Ed Spratt, 63, of Lexington, arrived at the church and left his mask in his car, though he acknowledged he should have worn it inside. Spratt said of voting in-person during the pandemic: “It wasn’t a concern in the forefront. It’s always there, but it was not, ’Oh god, I can’t go vote today.”

Tom Chandler, dean of the Arnold School of Public Health at the University of South Carolina, arrived at midday at his polling place at a church near Lake Murray. He wore a black face mask.

Though strips of blue tape outside guided voters to stand six feet apart, no line formed.

“As a public health professional, yes, I’m concerned about it,” Chandler said of voting in person during the pandemic. “But you know, my desire to exercise my right to vote far outweighs my concern for my personal safety from COVID.”

Chandler said his polling place did an excellent job with safety precautions, including providing voters with cotton swabs to use on the ballot machine screens.

U.S. Army veteran Bob Barnwell, a self-avowed Graham supporter, voted absentee for the senator ahead of Tuesday’s primary, in part because of the outbreak. The 72-year-old retired nurse was recently released from the hospital, where he was treated for several weeks after contracting COVID-19.

“Lindsey Graham is an outstanding senator, military veteran, retired Army judge, Christian man and native South Carolinian who loves this state,” Barnwell told The Associated Press on Thursday evening. “He is a powerful voice in the U.S. Senate for the right to life for the unborn and older citizens.”

Meg Kinnard can be reached at http://twitter.com/MegKinnardAP