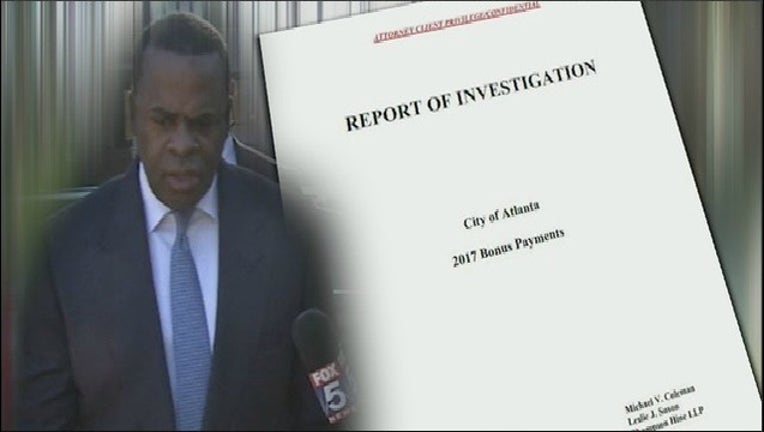 ATLANTA - When our FOX 5 I-Team uncovered Mayor Kasim Reed's holiday bonus program and Christmas party gifts for only some city employees, it started a political firestorm.

Now, the City Auditor and Ethics office have released the findings of their investigation.

Bonuses and contest winnings awarded by Atlanta Mayor Kasim Reed and other city officials were not allowed under city and state law, according to a report released Wednesday.

The investigation by the Atlanta City Auditor’s office and City Ethics Office found that the bonuses and winnings awarded by Mayor Reed and then-Human Resources Commissioner Yvonne Cowser Yancy “were not allowed under existing city and state law.”

The report also found bonuses paid by City Council members to their staff “were not allowed under state law and City Code.”

The City Council authorized the investigation in May to determine whether any city or state laws had been violated, after the FOX I-Team broke the story in April.

The FOX 5 I-Team uncovered an Instagram page posted by a city employee with video of a Christmas luncheon last December.

The story reported that Mayor Reed had hosted the Christmas party where he and other city officials handed out bonus money and prize winnings.

City records showed 63 employees at the party won money in contests and raffles ranging from $500 to $3000.

According to Wednesday’s report, the city made 146 supplemental income payments classified as bonuses and performance awards to 131 employees totaling $869,291, including $58,008 in duplicate bonuses paid in error to 4 executive level employees.

The report also raised other issues.

According to the report, “the payments made to the contest winners at the Mayor’s and Human Resources Commissioner’s holiday parties were inappropriate and raise ethical concerns.”

The investigation also found then-Chief Financial Officer Jim Beard “abused his position to authorize a bonus payment for himself.”

The report recommended several steps for the City Council.

They included preparing legislation consistent with state law to prohibit the payment of bonuses that are not specifically provided for in the City Code.

Wednesday’s report follows another report earlier this month that determined the bonuses violated the Georgia Constitution.

Mayor Reed who left office in January, has taken full responsibility for the holiday party and prizes.

Earlier this month, Reed issued a statement, saying he gave bonuses for exceptional work by his staff and the first report in early August found no state laws were intentionally violated.

"Awards to employees for exceptional service, to retain organizational talent, and reward achievement of success are longstanding practices in the City of Atlanta, both in the private sector and public governance as it competes for the same, top-tier talent. The compensation that I awarded to deserving members of executive leadership during my Administration were entirely consistent with historical practices at the City of Atlanta.  In fact, the Report acknowledges that since 2008 more than 500 bonuses of this kind have been distributed. Therefore, I understood these bonuses were allowable under City Code and Georgia law by the executive branch prior to and throughout my Administration.

"The Report establishes that no provisions of City Code nor any laws of the State of Georgia were intentionally violated, nor were any of these awards made in bad faith.  Quite the contrary, the Report makes it clear that I consulted with and relied upon the advice of various City personnel who universally understood the awards I was then considering to be: i) a long-established custom at the City of Atlanta; ii) allowed and authorized by law, a conclusion that is all the more reasonable with an informed appreciation of the City’s historical practices; and iii) importantly, falling within the authority vested in the discretion of the Office of the Mayor.  The sincerity and legitimacy of my understanding that the awards were proper is only underscored by the Report, which does not undermine my belief that, at the time that I authorized the awards and continuing to this day, my actions were correct and appropriate.

"Although the Report made findings about whether the amounts awarded comported with City Code, the City’s Charter, and other Georgia law, those conclusions are debatable, a matter of opinion, and represent but a singular viewpoint.  Even then, the Report’s determinations are not definitive or conclusive, which is clear from its continuous use of probabilities, likelihoods, and other non-committal phrasing to characterize its conclusions.  It is critical to note that, under the Report’s reasoning and within its explicit findings, similar awards made by members of the Atlanta City Council are also viewed as violating the State’s Gratuities Clause. Although I cannot agree with the Report in its entirety, I do support revisions to the City Code to resolve the “ambiguities” and “vague…language” that led to the reasonable differences in opinion on which I relied.

"At the end of my term, the City of Atlanta was on its best financial footing in 40 years. Atlantans benefited from eight consecutive balanced budgets, zero property tax increases, zero water rate increases, nine consecutive credit-rating increases, more than $200 million in cash reserves and a 37 percent reduction in crime. As a result, I awarded performance bonuses to members of my executive team - who all played a significant role in contributing to this record of achievement."