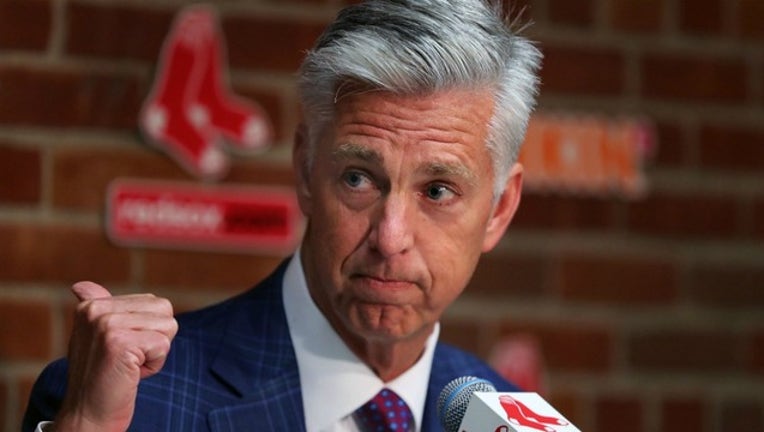 Red Sox spokesman Kevin Gregg made the announcement following a 10-5 loss to the New York Yankees that dropped the defending champions 17½ games behind their longtime AL East rivals. Boston, which had won three straight AL East titles, would be eliminated from the division race with a loss in the series finale on Monday night.

A veteran baseball executive who built a World Series champion in Miami and helped the Tigers win two AL pennants, Dombrowski was brought in to steady the Red Sox front office in 2015 with the team in the middle of back-to-back last-place finishes.

The Red Sox followed with three straight AL East titles - a first in franchise history, winning a club-record 108 games last season and their fourth World Series since 2004. From the start of Dombrowski's tenure on Aug. 18, 2015, through the beginning of this season, the Red Sox had posted a major-league best 320-210 (.604) record.

But this year's team - with largely the same roster as last year's - has gone 76-67, losing five of their first six games and never really getting back into contention in the division. While Dombrowski stood pat at the trade deadline, with a wild-card berth still in reach, the ballclub reeled off an eight-game losing streak.

"I just found out, so, surprised and shocked obviously," said Red Sox manager Alex Cora, who was hired as a rookie manager by Dombrowksi before the 2018 season. "Right now, not too much to say. We'll talk a little bit more tomorrow. But, he gave me a chance to come here and be a big league manager. It's one of those that they just told me so, I'm not ready to talk about it."

Right-hander Rick Porcello's career has been tied to Dombrowski's as much as any player. Dombrowski was the general manager of the Detroit Tigers when they drafted Porcello in the first round (27th overall pick) in 2007. Dombrowski traded Porcello to Boston in 2014, before following him in 2015.

Porcello, who took the loss against the Yankees on Sunday, and his teammates learned of the move as the game ended.

"I'm still processing everything, processing myself, too," Porcello said. "It's really hard to reflect on it right now. I'll have potentially a better answer in a couple days but, yeah, you never like to see anybody lose their job over what we're doing on the field. And unfortunately that's the case right here.

"You take lots of guilt with you as a player because you're the one that can make or break things and that's the part that hurts me."

Gregg said Boston's assistant general managers would share Dombrowski's duties for the final few weeks of the season. No other team officials were made available to the media. A formal announcement is expected on Monday.