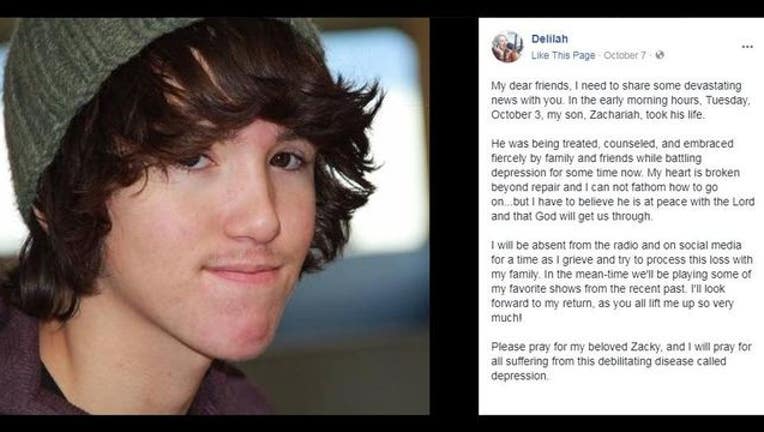 Radio host Delilah said she is taking a break from her nationally syndicated program to grieve after her son took his own life last week.

Delilah posted on Facebook Saturday that her son, Zachariah, killed himself Tuesday morning. Zachariah "was being treated, counseled, and embraced fiercely by family and friends while battling depression for some time now," she said.

"I will be absent from the radio and on social media for a time as I grieve and try to process this loss with my family," she wrote. "Please pray for my beloved Zacky, and I will pray for all suffering from this debilitating disease called depression."

Delilah added a picture of her son with the post. She didn't say how old he was.

Ten of Delilah's 13 children are adopted. Another son, Sammy, died in 2012 at the age of 16 amid a battle with sickle cell anemia.

Delilah's full name is Delilah Rene, though she uses only her first name on-air. The "Delilah" show is a mix of love songs and callers sharing personal stories that airs nightly on dozens of iHeartMedia stations around the U.S.