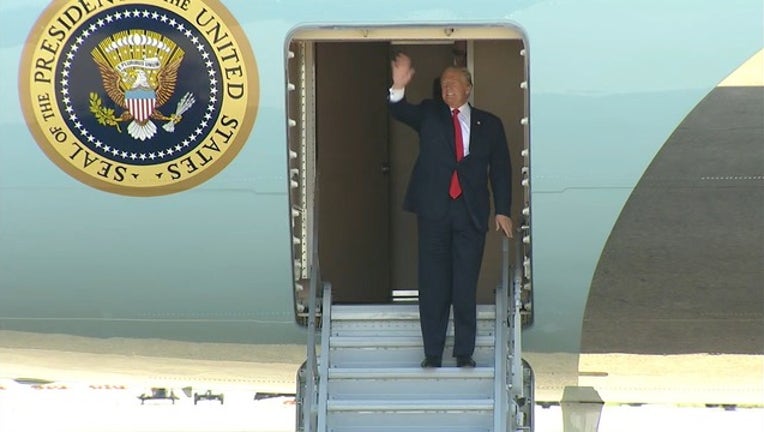 President Donald Trump made a short visit to Dallas Thursday afternoon for a private fundraiser.

The president attended a fundraiser at the Adolphus Hotel in downtown. Air Force One touched down in Love Field around 4 p.m. He arrived at the hotel around 4:30 p.m. and was greeted by supporters and protestors.

Trump’s fundraiser in Dallas was originally supposed to happen on May 8, but it was rescheduled due to developments with North Korea at the time. Trump still came to the NRA Convention, but he did not mix that with raising money.

The Thursday night reception came at a minimum cost of $2,700 per person. The dinner was $25,000 a plate. Those who wanted to take a picture with the commander-in-chief had to pay $50,000 for their ticket.

In anticipation of his visit, Dallas police closed down several roads around Downtown Dallas like Commerce, Field, and Griffin and Main Street near the hotel. They have since been reopened to traffic.

Early in the day, President Trump was in Houston for another private fundraiser. The White House said he also made sure to add in his original schedule time to meet with the Santa Fe High School shooting victims and their families.

Trump departed Love Field right around 6:15 p.m. as he headed back to the White House.

RELATED: Trump to meet with families of victims of Texas school shooting