A polar vortex is expected to bring frigid, wintry air over the eastern U.S.

Temperatures are forecast to be higher in Fairbanks, Alaska, than in New York City, Philadelphia, Cleveland and as far south as Atlanta into the weekend.

CINCINNATI - A blast of Arctic air over Mother’s Day weekend will leave some major cities in the Midwest and eastern U.S. colder than parts of Alaska.

A polar vortex is expected to bring frigid, wintry air over the eastern U.S., leading to snow and record-low temperatures not often seen in mid-May, according to the forecast site AccuWeather.

In fact, temperatures are forecast to be higher in Fairbanks, Alaska, than in New York City, Philadelphia, Cleveland and as far south as Atlanta into the weekend.

The high temperature may only reach 50 degrees Fahrenheit in New York City this weekend, rather than around 70, which is average for the date.

Temperatures will be the most extreme east of the Rockies and over the Great Lakes and Northeast.

“Over some areas this cold surge would lead to a late frost/freeze where the growing season has already started,” the National Weather Service said. 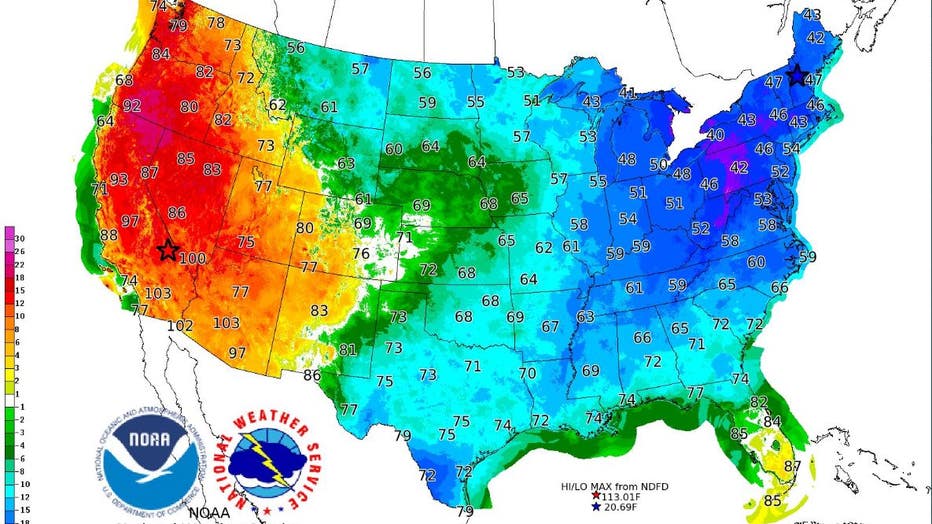 Snowfall is also expected in parts of the interior Northeast. Spanning late Friday to Saturday, meteorologists expect some accumulating snow in higher elevations of New York state, northern Pennsylvania, northwestern Connecticut, western Massachusetts and the southern parts of Vermont and New Hampshire, according to AccuWeather.

"A lobe of the polar vortex will spin southward and loop around the Great Lakes and northeastern United States into next week before shifting farther northwest over Canada toward the middle of May," said Paul Pastelok, AccuWeather's long-range forecaster.

Meanwhile, those in the West were experiencing unseasonably warm temperatures.

The National Weather Service issued excessive heat warnings for Phoenix and much of the surrounding desert southwest areas through late this week, while heat watches were also in place for the Los Angeles and Las Vegas areas.