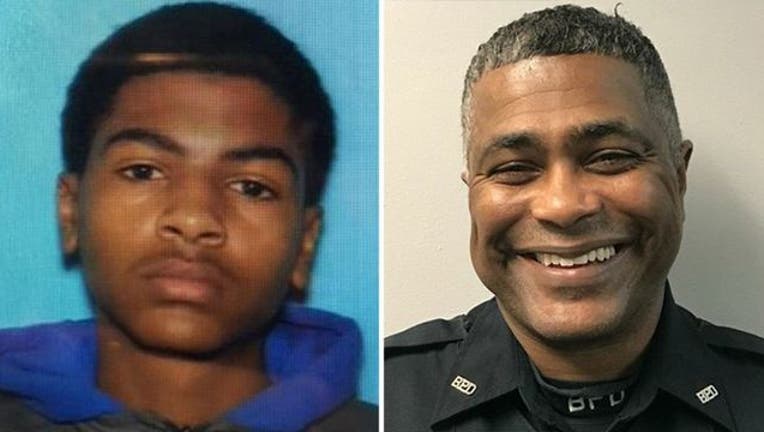 (FoxNews.com) - The 19-year-old student suspected of killing his parents at a Central Michigan University dormitory Friday used a gun that was registered to his father, authorities said Saturday.

James Eric Davis Jr., 19, was apprehended just after midnight Saturday after being wanted in connection with the shooting deaths of his father James Eric Davis Sr., 48, and his mother Diva, 48. The manhunt for Davis went on for nearly a day and involved more than 100 police officers.

Central Michigan University Police Chief Bill Yeagley told reporters Saturday that the gun used in the shooting belonged to Davis Sr., a part-time police officer in the Chicago suburb of Bellwood. He would not say whether the father had brought the gun to campus when picking up his son, but noted that Davis Jr. was seen on video in the dorm's parking lot with the gun before going into the building where his parents were shot.

Yeagley did not say if the gun was Davis Sr.’s service weapon.

Providing a timeline of the incident, Yeagley said Davis Jr. ran into the office of the CMU police officers Thursday in fear saying he believed someone was trying to hurt him. Davis was "very vague" and claimed someone had a gun. The officers investigated and were able to identify someone who "may have been threatening Davis."

The individual was found and interviewed to see if there was a threat. During that time, officers were talking to Davis who was "not making much sense." The officers determined there was no risk to Davis.

A few hours later, officers found Davis in the dorm's hallway with his suitcases and bags acting "unreasonable." The officers asked him to call his parents. The officers spoke to Davis' mother to tell her about her son's recent behavior. The officer said they were suspicious of drugs. Following the conversation, Davis was taken to the hospital.

Davis stayed at the hospital until his parents picked him up the next day. The family went to the school's campus to pick up his bags and take him home, Yeagley said.

Surveillance video appeared to show Davis Jr. in the dorm's parking lot with the gun before going into the building where his parents were shot. Following the incident, the 19-year-old fled on foot and ran on railroad tracks. Authorities were able to recover the weapon at the scene.

Yeagley said the investigation was ongoing. A motive was not immediately clear.

The shooting at Campbell Hall occurred on a day when parents were arriving to pick up students for the beginning of a weeklong spring break.

Yeagley also said authorities were able to track Davis due to a tip from a railroad employee. The student is being treated at McLaren Hospital. He was reportedly "hypothermic and confused" when he was taken into police custody, the Lansing State Journal reported.