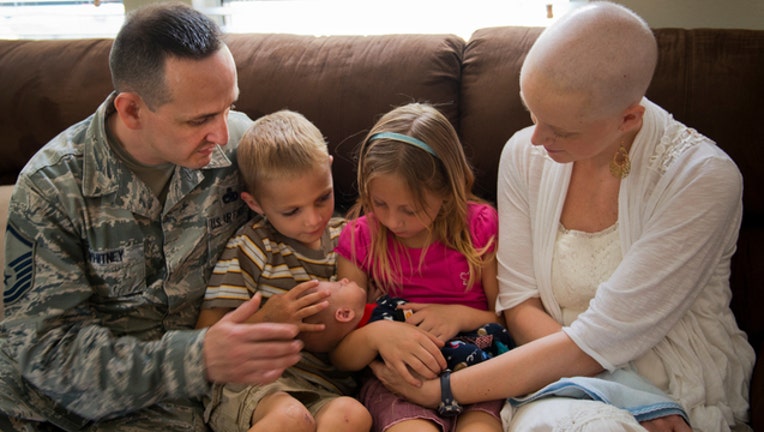 Naturally the photos were meaningful to Whitney and her family, but as comments from around the world poured in Whitney said she realized the profound power that others were also identifying with.

"I guess it's that universal understanding of what it's like to do what's best for your children, to be around for them," she told the Northwest Florida Daily News.

Whitney was diagnosed with breast cancer when she was 31-years-old and only 20 weeks pregnant. She had to start her first round of chemotherapy while pregnant.

When she gave birth to Kal El in April, she could only breastfeed him for two weeks because she was about to start another round of chemotherapy. Local photographer Katie Murray took a picture of a bald Whitney, beaming as she watches the baby latching onto her only remaining breast. A visible scar stands in place of the breast she lost to cancer.

"It makes me try to appreciate every moment I have with them," says Whitney, who also has two other children, 6-year-old Phoenix and 7-year-old Corah. She let them help shave her head in a hair-cutting party.

Her husband, Michael, an airman at Eglin Air Force Base, was allowed to work out of their home for most of the summer, and has helped the family stay positive. His own father died of cancer years earlier.

"I've been down this road before," he remembers telling himself. "I kept my head up, kept moving forward."

Whitney, who also struggles with depression, is also grappling with the fact that the cancer drug she'll have to take for the next 10 years interferes with her antidepressant. The medication changes have been challenging.

"I know there's a risk it could come back. I want to be around for them when they get older and get married and have kids."

The couple has also received an outpouring of support, including from dozens of mothers who donated their breast milk for Whitney to feed Kal El.

Even though she can't have more children, she's grateful the children she has are healthy and happy. She's trying to focus on the here and now.

"It's been a hard ride," Whitney said. "But it's been really rewarding just knowing that he's here and he's perfect, just seeing him smile and laugh every day."