A timelapse taken from the summit of Oregon’s Black Crater volcano captured the Perseids meteor shower on August 7.

The 2021 Perseid meteor shower peaks overnight on Thursday, Aug. 12 as Earth passes through the debris tail of the comet Swift-Tuttle.

The Perseids are active every year from July 14 to Aug. 24, but the meteor shower will peak between midnight on Aug. 11 to dawn on Aug. 13.

NASA warns that the next Perseid meteor shower may not be visible until 2024. The agency expects the sky in 2022 and 2023 will not be ideal during the Perseids’ peak.

"With a full moon and lower meteor activity during the Perseids' peak in 2022, and a waning crescent high in the sky for 2023, this might be your best chance to do some summer skywatching for a few years," NASA said.

Up to 100 meteors will pierce Earth’s atmosphere every hour, traveling at speeds of up to 37 miles per second.

The speed at which the meteors travel creates resistance with Earth’s atmospheric particles, causing the meteors to burn in bright balls of fire in the night sky.

How to watch the Perseid meteor shower

The Perseids will be visible around the world, especially in the Northern Hemisphere, from July 14 to Aug. 24.

The meteors will peak on Aug. 2 and 13 and will be visible as early as 9 p.m. and continue until 2 a.m. (between sunset local time and dawn) on clear nights.

You don't need any special equipment to view the Perseids, just your eyes. NASA recommends letting your eyes adjust to the night sky for several minutes for maximum viewing. 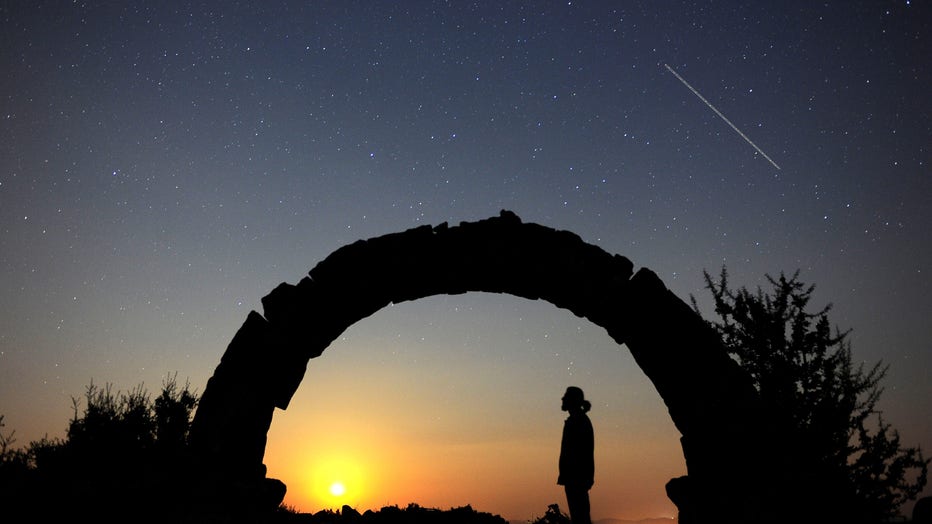 USAK, TURKEY - AUGUST 12: A meteor lights up the sky during perseid meteor shower above the ancient city of Blandus in Usak, Turkey.

"You can go out after dark, around 9 p.m. local time, and see a few Perseids," NASA said in a blog post. "Just know that you won’t see nearly as many as you would had you gone out during the early morning hours."

If the weather does not permit for viewing of the Perseids, NASA plans to broadcast the meteor shower live from a camera at NASA’s Marshall Space Flight Center in Huntsville, Alabama on Facebook.

What is the Perseid meteor shower?

The Perseids appear to originate in the region of the Perseus constellation, but they don’t actually come from the constellation.

As the 109P/Swift-Tuttle comet orbits the sun, it leaves behind a trail of debris that Earth passes once a year.

When Earth passes through 109P/Swift-Tuttle’s debris, particles from the comet come into contact with Earth’s atmosphere, creating a meteor shower.

109P/Swift-Tuttle was discovered in 1862 by Lewis Swift and Horace Tuttle and measures around 16 miles across.

While the Perseids peak in August, meteors are still visible for about 10 days after peak.

The next meteor shower won’t be visible until the Orionids light up the October sky.