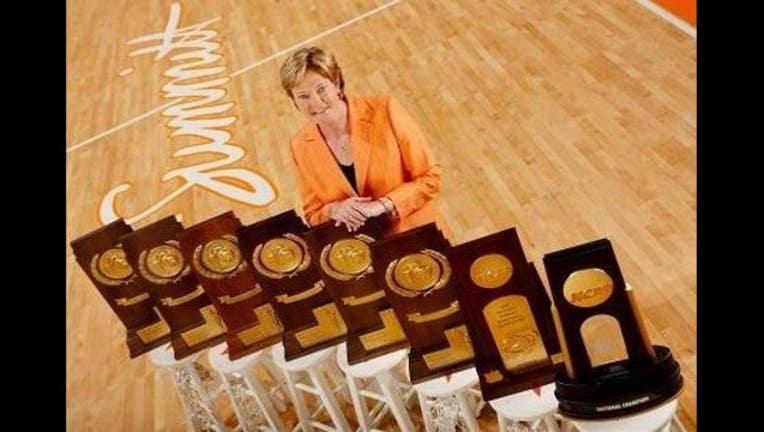 Amid reports of Summitt's failing health, her family issued a statement asking for prayers and saying that the 64-year-old Summitt is surrounded by the people who mean the most to her. It also asked for privacy.

The statement was posted on the Pat Summitt Foundation's website and was issued by Erin Freeman, a spokeswoman for the Summitt family.

Former Tennessee player Tamika Catchings was flying to Knoxville to visit the coach instead of returning to Indiana with the WNBA's Fever. Other former players were issuing support on Twitter through the "PrayForPat" hashtag. Phoenix Mercury center and Tennessee alum Isabelle Harrison said former Lady Volunteers players were keeping up with Summitt's situation in a group text-message chain.

"There are like 30 of us in a group chat right now talking, and people are flying into Knoxville and trying to see her," Harrison said Sunday after the Mercury's victory over the New York Liberty. "You just didn't expect any of this to happen. Everyone's trying to fill each other in with any information they have."

Harrison said she often went to Summitt's home and rehabbed with her last year while recovering from a torn anterior cruciate ligament that ended the post player's senior season at Tennessee prematurely. They also occasionally went to practice together.

"I was at practice one day watching some of the girls, (and a) freshman took a fast shot," Harrison said. "(Summitt) looked at me and was like, 'What was wrong was that?' I was like, 'She shot too quick.' (She said), 'Yeah, that's right.' (Summitt) still had it."

The update about Summitt's condition brought a flood of support from throughout the sports world.

Summitt stepped down as Tennessee's coach in 2012, one year after announcing her diagnosis of early onset dementia, Alzheimer's type. She went 1,098-208 with eight national titles. She has the most career wins of any Division I men's or women's basketball coach.

Since her diagnosis, Summitt has played a leading role in the fight against Alzheimer's. She launched the Pat Summitt Foundation, which is dedicated to researching and educating people about the disease while also providing services to patients and caregivers. The Pat Summitt Alzheimer's Clinic is scheduled to open at the University of Tennessee medical center in December.

"When she fights this disease, what she has taught all of us is how to do it with courage," former Tennessee women's athletic director Joan Cronan said at a 2015 charity event honoring Summitt. "She's done that from Day One. It's been about (how) we can find a cure for this disease, and she has done it facing it straight-on and she's done it giving back as she always has."

Summitt continues to hold a position as head coach emeritus of the Tennessee women's basketball team. She attended nearly every home game and many practices in the first year after stepped down as coach, though she had a less visible role in subsequent seasons. She cut back on public appearances in recent years.