Jon Ossoff and Raphael Warnock to be sworn in after inauguration

Warnock will be the first African-American senator from Georgia, while Ossoff will be the state’s first Jewish senator.

WASHINGTON, D.C. - Jon Ossoff and Rev. Raphael Warnock will get to work Wednesday after they are sworn in as Georgia's newest senators.

Ossoff and Warnock are set to be sworn in to office Wednesday afternoon by Vice President Kamala Harris shortly after President-elect Joe Biden's inauguration.

Warnock will be the first African American senator from Georgia, while Ossoff will be the state’s first Jewish senator and the Senate’s youngest sitting member. Their wins bookend a divisive and drawn-out election cycle that brought seismic shifts to Georgia politics and made the once reliably red state a key battleground.

The runoff election that put them both in office saw a record amount of money spent as the Democrats and Republicans battled it out for control of the senate.

Almost 4.5 million Georgians ended up casting a ballot, more than double the amount in the state's last Senate runoff in 2008.

The woman credited with helping Georgia turn Blue said she is watching what the Georgia General Assemble does this year to voting laws in the state.

The victories gave Democrats both Georgia Senate seats for the first time in 18 years and will make the Senate a 50-50 split between Democrats and Republicans, allowing Harris to be the tie-breaking vote on legislation. 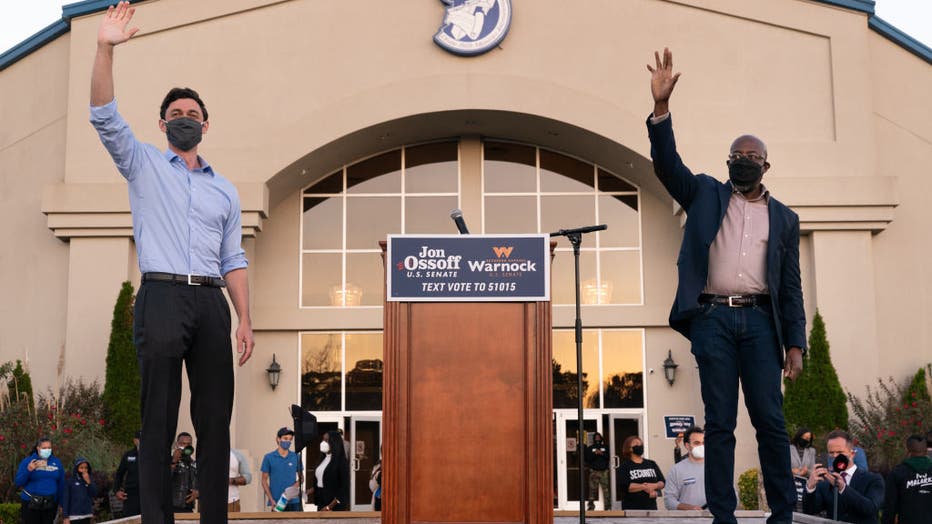 Raphael Warnock and Jon Ossoff are seen at a campaign event in Jonesboro, Georgia.(Photo by Elijah Nouvelage/Getty Images)

The two Democrats will take office just as the Senate considers whether to convict President Donald Trump in an impeachment trial for inciting the deadly storming of the U.S. Capitol and as Biden seeks to jump-start his agenda after inauguration.

Loeffler gave a farewell speech from the Senate floor Tuesday, where she thanked her supporters and wished Warnock well. She also took parting shots at her detractors, slamming what she called "cancel culture" and news media coverage of her campaign.

Sen. Kelly Loeffler addressed the floor of the U.S. Senate in a farewell address on Jan. 19, 2021.

Perdue’s term ended Jan. 3, while Loeffler remains in the Senate until Warnock is sworn in because she was appointed to fill Isakson’s unexpired term.