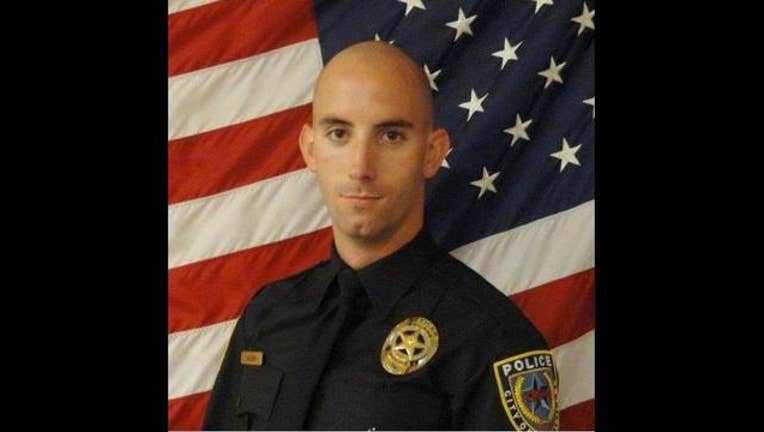 ABILENE, Texas (FOX 26) - Abilene Police Department Chief Stan Standridge released the following statement regarding the death of an off-duty officer and the search for the people responsible:

On August 31, 2015, the Clyde Police Department received a 9-1-1 call from a south side residence shortly after 7 pm indicating a man had been found deceased in the home. When police arrived, they found the body of off-duty Abilene Police Officer Don Allen. He was the only person inside the residence when found by family members. The manner of death was clearly suspicious, so the Clyde Police Department contacted the Abilene Police Department and Texas Rangers for assistance. All three agencies and the FBI have now been working through this investigation non-stop, and we will continue until those responsible are taken into custody. This investigation is being treated as a homicide. At this time, there does not appear to be any danger to members of the Clyde community, nor is there any indication that random law enforcement personnel are being targeted.

I will defer all other questions about this investigation to the Texas Rangers, of whom Ranger Shane Morrow is primary. My primary purpose of this media conference is to give Abilene a keen understanding of the great man and great peace officer that we lost yesterday. Before Abilene hired Don, he was working as an officer in Cisco, Texas. He had been with that agency for a year and 5 months. What really impressed us about Don was the fact that he applied for Abilene and indicated he wanted to go through our full police academy, versus an abbreviated lateral academy. This entailed another long and grueling six months of training. He completed the training, and in doing so gained lifelong friends and tremendous respect for fully adopting Abilene’s core values. Officer Don Allen graduated from Police Academy Class 51 along with 14 other officers. As a peace officer, he had accrued 1,400 training hours. His total service time as a Texas Peace Officer was 3 years and 3 months.

Officer Allen is survived by his parents of Clyde, as well as two brothers and a sister. This family is heartbroken over the loss of their loved one, as is our police family. Parents should not have to bury their children, and this family certainly needs our love and prayers during this time. Officer Allen was engaged to be married, having proposed to his fiancé on July 12th. The Police Department, Police Association, Police Spouses Association, and our Chaplain have worked together to comfort these family members during this time. Visitation is set for Thursday, September 3rd from 5 to 7 pm in the Chapel at Beltway Park Church, located at 4009 Beltway South, Abilene. Services will then be Friday, September 4th at 10 am at Beltway in the main sanctuary. Graveside services will immediately follow at Clyde Cemetery.