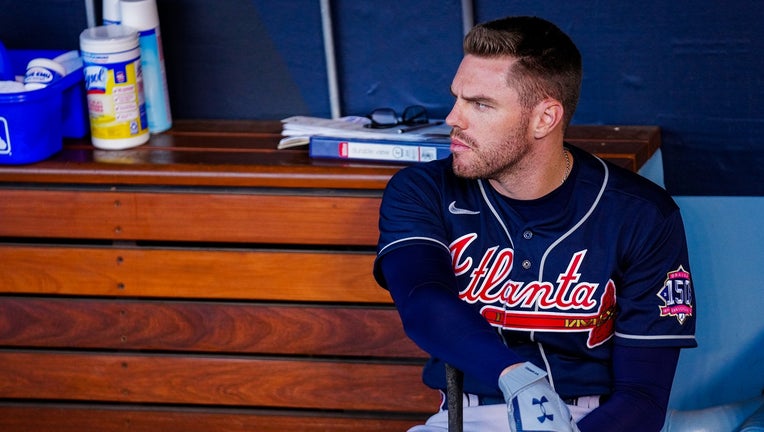 LOS ANGELES - To say the Atlanta Braves had a bad night at Dodger Stadium would be an understatement. They fell 11-2 to the Dodgers tightening up the race for the pennant to 3-2.

Max Fried had every ingredient in front of him for the biggest day of his baseball life at Dodger Stadium.

The Braves ace from Santa Monica took the mound Thursday night with the opportunity to pitch Atlanta into its first World Series of the 21st century. He had the chance to do it in front of about 60 family members and friends at the fabled baseball cathedral where he grew up idolizing Shawn Green and Clayton Kershaw.

Fried did not seize his Hollywood moment: The talented left-hander had his shortest start in nearly five months and took an emphatic loss in the Braves’ 11-2 defeat in Game Five of the NL Championship Series.

Playoff-tested Los Angeles earned a return trip to Atlanta by hitting Fried early and often, chasing him in the fifth and leaving him disconsolate in the dugout after failing to finish five innings for the first time since June 1.

Fried’s big night at Chavez Ravine turned out to be memorable, but for none of the reasons he had hoped. The pitcher with the majors’ lowest ERA in the second half of the season — including a minuscule 1.55 ERA over his last 14 starts — gave up eight hits and five runs, walking two and managing only three strikeouts.

While the Dodgers’ pitching staff was in thorough disarray after extensive bullpen use and three straight mediocre starts from Max Scherzer, Walker Buehler and Julio Urías, the Braves had Fried pitching on full rest after his six solid innings in Game 1 of the NLCS.

Fried even got an early two-run lead in Game Five from fellow Southern California native Freddie Freeman’s first-inning homer. But the Dodgers’ bats awoke from their postseason-long struggles to beat up Atlanta’s ace.

The Braves took the lead early. Ozzie Albies singled with one out and Freeman homered.

Adam Duvall followed Freeman to the plate and had a 2-2 count when catcher Will Smith went out to the mound. Pitching coach Mark Prior and manager Dave Roberts joined them and Kelly then walked off, leaving after two-thirds of an inning and 28 pitches.

Evan Phillips came on in relief and struck out Duvall to end the first with Atlanta leading 2-0.

AJ Pollock and Chris Taylor tagged Fried for homers in the second inning, turning that 2-0 deficit into a 3-2 lead. Taylor hit the first of his historic three homers on a first-pitch, 95 mph fastball across the heart of the plate by Fried, who looked shaken from that moment onward.

Fried’s discombobulation on the mound was emphasized later in the inning when he hit Trea Turner on the shoulder with a pitch after Cody Bellinger distracted his delivery by breaking early from first base. Instead of throwing to first for an easy inning-ending pickoff, Fried looked confused and continued his pitching motion, plunking Turner in the process.

Fried gave up an RBI single to Taylor in the third inning, but he struck out Bellinger to end that threat before a 1-2-3 fourth inning. Just when Fried appeared to be rediscovering his groove, he walked Will Smith and Albert Pujols in the fifth, prompting manager Brian Snitker to pull Fried at the earliest point in his last 23 starts.

Fried’s only other playoff loss came in 2020, when he lost Game Six of the NLCS to the Dodgers despite pitching three-run ball into the seventh inning. The Braves also lost the only other potential clinching game in which Fried has pitched, dropping one to St. Louis in the NL Division Series in 2019.

The location and timing of this loss undoubtedly will sting Fried, who famously pitched alongside Lucas Giolito and Jack Flaherty in 2012 at Harvard-Westlake, the private high school in Studio City with dozens of globally known alumni. That pitching trio couldn’t win a state title, but all three were opening day starters in the majors this season.

All three former Wolverines have already earned a postseason victory during their major league careers, but Fried is hoping to be the first of the trio to reach the World Series. The Braves had been 5-1 in Fried’s playoff starts before this demolition at Dodger Stadium.

Chris Taylor hit three homers and drove in six runs as the Los Angeles Dodgers broke loose at the plate to beat Atlanta 11-2 on Thursday night, cutting the Braves’ lead in the NL Championship Series to 3-2.

AJ Pollock had two home runs and four RBIs for the Dodgers, who have won seven straight postseason elimination games dating to last season. They also trailed 0-2 and 1-3 against Atlanta in the NLCS last year before rallying to win three straight games at a neutral site in Arlington, Texas.

After mustering just four hits in a 9-2 loss in Game 4 that pushed them to the brink of elimination, the desperate Dodgers rapped out eight hits by the third inning off Max Fried. They finished with 17, a club record for a postseason game

Starting at third base in place of injured Justin Turner, Taylor became the second Dodgers player with a three-homer game in the postseason. Kiké Hernández also did it in Game 5 of the 2017 NLCS against the Chicago Cubs.

The Dodgers took the lead in the third and added an insurance run in the fourth leading 4-2.

Another home run in the bottom of the fifth put the Dodgers up 6-2.

Dodgers Chris Taylor hit three homers in a single game for his first time. That gave the Dodgers a 7-2 lead in the seventh.

Game 6 is Saturday back in Atlanta, where the Braves get two more chances to earn their first trip to the World Series since 1999.

First pitch at Truist Park in Atlanta on Saturday is 5 p.m.