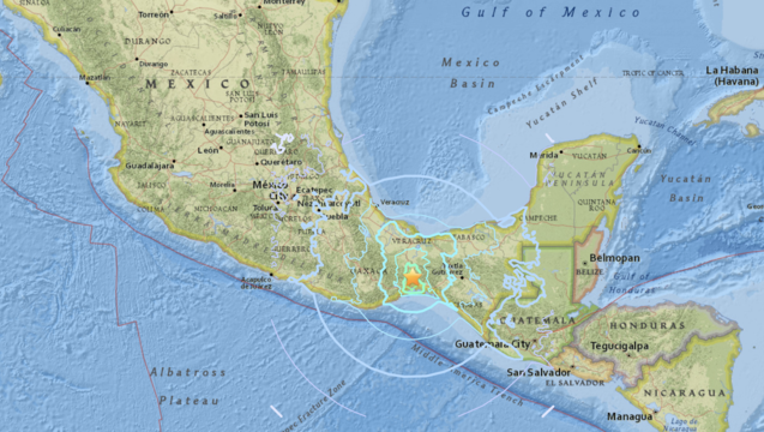 MEXICO CITY (AP) — A strong new earthquake shook Mexico on Saturday, toppling already damaged homes and a highway bridge and causing new alarm in a country reeling from two even more powerful quakes this month that together have killed nearly 400 people.

The U.S. Geological Survey said the new, magnitude 6.1 temblor was centered about 11 miles (18 kilometers) south-southeast of Matias Romero in the state of Oaxaca, which was the region most battered by a magnitude 8.1 quake on Sept. 7.

It was among thousands of aftershocks recorded in the wake of that earlier quake, which was the most powerful to hit Mexico in 32 years and killed at least 90 people.

There was some damage in Oaxaca but no immediate reports of new deaths. The Federal Police agency posted images online showing a collapsed bridge that it said had already been closed due to damage after the Sept. 7 quake.

Bettina Cruz, a resident of Juchitan, Oaxaca, said by phone with her voice still shaking that the new quake felt “horrible.”

“Homes that were still standing just fell down,” Cruz said. “It’s hard. We are all in the streets.”

Cruz belongs to a social collective and said that when the shaking began, she was riding in a truck carrying supplies to victims of the earlier quake.

Nataniel Hernandez said by phone from Tonala, in the southern state of Chiapas, which was also hit hard by the earlier quake, that it was one of the strongest aftershocks he has felt.

“Since Sept. 7 it has not stopped shaking,” Hernandez.

U.S. Geological Survey geophysicist Paul Caruso said the new temblor was an aftershock of the 8.1 quake, and after a jolt of that size even buildings left standing can be more vulnerable.

“So a smaller earthquake can cause the damaged buildings to fail,” Caruso said.

“At the moment the greatest damage has been to the Ixtaltepec bridge, which should be rebuilt, and structures with previous damage that collapsed,” President Enrique Pena Nieto tweeted. He said government workers were fanning out in Juchitan to provide help to anyone who needs it.

Jaime Hernandez, director of the Federal Electrical Commission, said the quake knocked out power to 327,000 homes and businesses in Oaxaca but service had been restored to 72 percent of customers within a few hours.

Buildings swayed in Mexico City, where nerves are still raw from Tuesday’s magnitude 7.1 temblor that has killed at least 305 across the region. Many residents and visitors fled homes, hotels and businesses, some in tears.

At the Xoco General Hospital, which is treating the largest number of quake victims, workers ordered visitors to evacuate when seismic alarms began to blare.

That included Syntia Pereda, 43, who was reluctant to leave the bedside of her sleeping boyfriend. Jesus Gonzalez, 49, fell from a third-story balcony of a building where he was working during Tuesday’s quake and was awaiting surgery.

But she controlled her emotions, went outside and came back when the trembling was over.

Alejandra Castellanos was on the second floor of a hotel in a central neighborhood of Mexico City and ran down the stairs and outside with her husband.

“I was frightened because I thought, not again!” Castellanos said.

Mayor Miguel Angel Mancera said there were no reports of significant new damage in the capital, and rescue efforts related to Tuesday’s quake were continuing. He reported that two people died of apparent heart attacks during the new temblor.

At the site of an office building that collapsed Tuesday and where an around-the-clock search for survivors was still ongoing, rescuers briefly evacuated from atop the pile of rubble after the morning quake before returning to work.

As rescue operations stretched into Day 5, residents throughout the capital have held out hope that dozens still missing might be found alive. More than half the dead — 167 — perished in the capital, while another 73 died in the state of Morelos, 45 in Puebla, 13 in Mexico State, six in Guerrero and one in Oaxaca.

Along a 60-foot stretch of a bike lane in Mexico City, families huddled under tarps and donated blankets, awaiting word of loved ones trapped in the four-story-high pile of rubble behind them.

Families have been sleeping in tents, accepting food and coffee from strangers, people have organized to present a united front to authorities, who they pressed ceaselessly for information.

They were told that water and food had been passed along to at least some of those trapped inside. On Friday morning, after hours of inactivity blamed on rain, rescuers were readying to re-enter the site, joined by teams from Japan and Israel. Fernandez said officials told them they knew where people were trapped on the fourth floor.

It’s the moments between those bits of information that torment the families.

“It’s that you get to a point when you’re so tense, when they don’t come out to give us information,” she said. “It’s so infuriating.”