Chris McKinley never knew Katie personally but was drawn to do something to keep her memory alive. They are raising money for memorial benches and a tree to be planted in Katie’s memory.

ATLANTA - Atlanta police are still searching for whoever is responsible for the brutal stabbings of Katie Janness and her dog, Bowie.

The two were found dead inside Piedmont Park exactly one month from Saturday.

"We thank you for your patience. This is going to take time," An Investigator with Atlanta Police said.

It’s been one month since Katie Janness and her dog Bowie were found gruesomely stabbed to death inside Piedmont Park.

Atlanta police have not released any information on a suspect in the case.

Each day the memorial for the victims continues to grow. 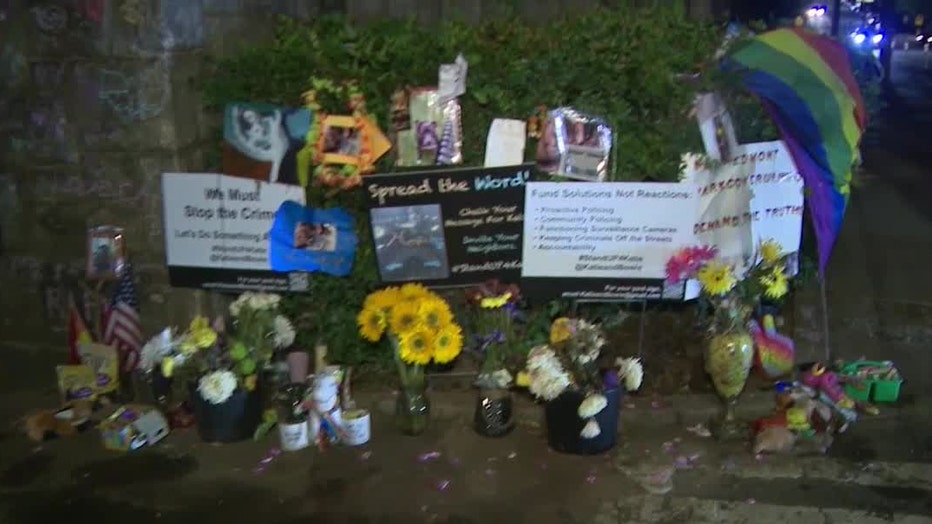 The memorial outside Piedmont Park continues to grow a month after the death of Katie Janness and Bowie, her fiancé's dog. (FOX 5 Atlanta)

"We kept that memorial alive for a month. I think that’s a big milestone," Chris McKinley said.

Chris McKinley never knew Katie personally but was drawn to do something to keep her memory alive.

"I drive past and I walk past every day and I see people standing there and looking at it. Almost as if it’s the Washington monument. It truly is a memorial that people are visiting," McKinley said.

McKinley, along with others, are committed to growing the memorial into something more permanent.

They are raising money for memorial benches and a tree to be planted in Katie’s memory.

McKinley believes those who live in the area are walking on eggshells until the person responsible is found.

"I assure you that the men and women assigned to this investigation are working around the clock," an investigator with Atlanta Police said.

A GoFundMe to assist the family with funeral expenses has been set up.