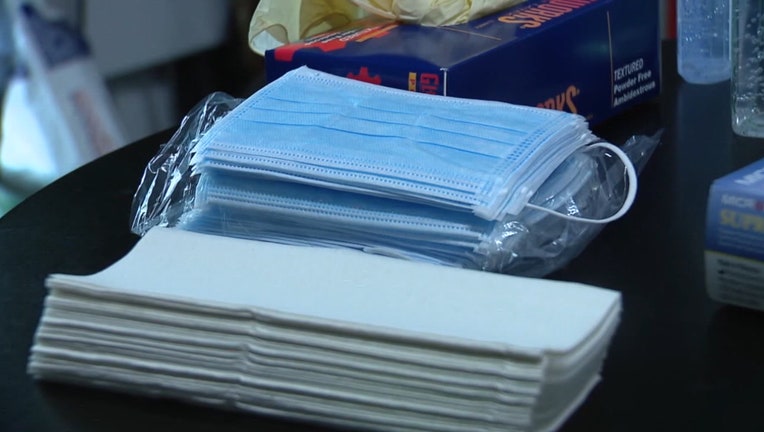 ATLANTA - More than half of all Georgia public school students are now required to wear masks in class, according to district announcements tracked by The Associated Press, as many school systems that had sought to let students and parents decide on the divisive issue of face coverings clamp down amid roaring COVID-19 infection rates.

At least 56 of Georgia’s 180 traditional school districts are now requiring masks in at least some schools, up from only a handful of districts before class started in August. The rules cover nearly 950,000, or about 55%, of Georgia’s 1.7 million public school students.

The shift began in late July, when Atlanta and Gwinnett County schools joined DeKalb and Clayton counties in saying they would require masks. But many other districts tried to open their doors as mask-optional. Some switched positions within days, while others held out for weeks.

During that time, infections leaped. More than 1% of school-age children in Georgia have tested positive for COVID-19 in the past two weeks. Children between the ages of 5 and 17 are now more likely than adults as a whole to test positive for COVID-19. The state Department of Public Health reported more than 30 infection clusters in schools statewide, the highest since the epidemic began.

Grady Memorial Hospital officials said COVID patients are younger and sicker than during the pandemic's original peak. Almost all of them are unvaccinated, officials say.

Georgia’s 7-day rolling average of COVID-19 infections rose to nearly 8,700 on Wednesday, according to state figures. The state is rapidly approaching the peak of more than 9,600 daily infections recorded in early January. The number of COVID-19 patients in hospitals rose to 5,500 across Georgia on Wednesday, close to the record of roughly 5,700 set in early January. More than 90% of all intensive care beds statewide were also in use.

Many districts have been overrun by infections and quarantines, with so many teachers out that they can’t staff classrooms. Statewide, 26 districts and charter schools are sending all their students home and going all-virtual temporarily. The coastal Glynn County district, with more than 12,000 students, became the largest to take that step Tuesday. Two districts and a charter school have already returned from timeouts from in-school learning, while at least eight districts are closing individual schools. At least seven districts have switched to A/B schedules where students attend class every other day. Overall, more than 100,000 students statewide have been affected by closures or schedule changes.

The 28,000-student Columbia County district in suburban Augusta moved to require masks on Tuesday after hundreds of students and employees had tested positive over three weeks of school and more than 1,000 students were sent into quarantine.

As COVID-19 spreads through classrooms across the state, Marietta City Schools is offering free testing to faculty, staff, students, and their families.

School leaders say they’re requiring masks in part to cut quarantines. Under guidance the U.S. Centers for Disease Control and Prevention updated over the summer, if everyone in a classroom is masked and 3 feet (1 meter) or more apart, students don’t have to quarantine as long as they don’t show symptoms. Georgia school districts are free to set their own rules, but the CDC rules remain influential.

"If we are going to be able to complete school from now until May 25, this appears to be our best chance," The Augusta Chronicle quoted Columbia County board member Judy Teasley as saying on Tuesday.

Emory School of Medicine's Dr. Neil Winawer gives an update on the FDA's approval of the Pfizer coronavirus vaccine, a change that officials hope will inspire more people to be vaccinated.

"Though issues like mask mandates can divide us, there is more that unites us," Woods wrote. "One unifying belief shared across spectrums is the critical need for in-person learning."

Mask-wearing continues to draw opposition. Dalton and Whitfield County schools are letting parents send a note to school opting their children out of mask requirements. Parents both seeking and opposing mandatory face coverings continue to protest in Cobb County, the state’s second largest district. Cobb is part of a ring of conservative-controlled suburban holdouts from the move toward masks, along with Cherokee, Paulding and Forsyth counties.

But the rising tide of illness is pressuring even those districts. Forsyth County Superintendent Jeff Bearden told parents in a written message that the district was launching a campaign to promote voluntary masking among students and staff. He noted that nearly 800 students and 100 staff had active cases of COVID-19.

"Our biggest concern is having sick children attending school and potentially spreading the virus," Bearden wrote.