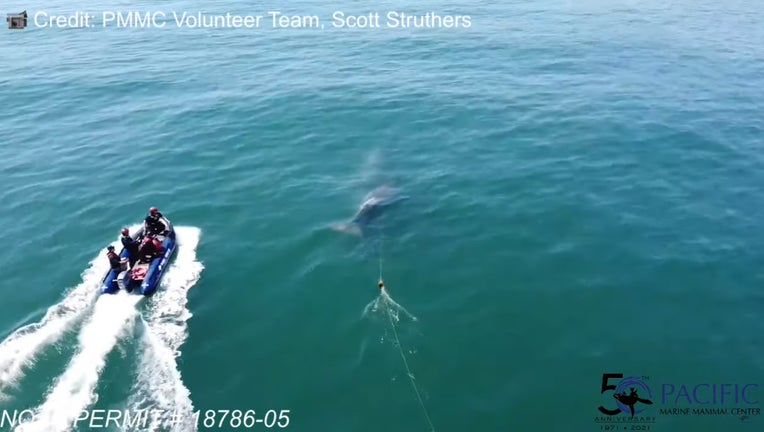 Marine mammal experts are attempting to relocate a baby whale that was seen off the Southern California coast entangled in what appears to be commercial fishing gear.

The Pacific Marine Mammal Center and NOAA Large Whale Entanglement Team responded to a report of the entangled baby whale on April 19 off the coast of Dana Point.

Marine mammal experts are asking the public in and around Monterey Bay and soon the Bay Area coast, to help them locate a 20 foot long gray whale calf entangled in fishing gear.

Various vessels in the area moblized to find and track the whale. Meanwile, the Pacific Marine Mammal Center began efforts to try and remove the entanglement from the baby whale.

Drone video taken by the non-profit shows the entanglement dragging behind the baby whale, which is several feet in length. The baby whale is also dragging what appears to be a buoy.

Unfortunately, the team was unable to remove the main entangement, which wrapped around the head of the whale. The team reported that the mother of the baby whale was very protective, and positioned herself between the calf and the rescue team, which hindered access to the entanglement.

During the five-hour attempt, the team also experienced issues with successfully attaching a control line to the baby whale. Each time they tried, the entanglement line would snap.

Now, experts are working to relocate the baby whale, which is most likely alongside its mother, and believed to be off the Monterey coast. When found, experts will once again attempt to remove the entanglement.

"The Large Whale Entanglement network which PMMC is a part of has people on the look-out up and down the entire coast. If the whale is spotted again a team will absolutely be sent out," said Krysta Higuchi, public relations manager with the Pacific Marine Mammal Center.

Catherine Kilduff, a lawyer for the Center for Biological Biodiversity, said since California leads the world in high technology, it's time for ropeless fishing gear which is already under testing. "Fishing has to accept that kind of change. Where they can retrieve pots without having a line that goes all the way to the sea floor," said Ms. Kilduff.

Already leading the way, California's Dungeness crab fishermen and women with current practices as well as the testing and adoption of new technologies.

"That fishery is now not identified as a major threat to the humpback whales," said National Oceanic and Atmospheric Administration primary whale disentangler Pieter Folkens.

Many technologies could make non-rope remote recovery possible for a tiny increase in the price per-pound at the market.

If you see the entangled baby whale, or any other entangled whale,  you are asked to report it by calling (877) SOS-WHALE.