Police knab bank robbery suspect as he walked out

Marietta police arrested a man accused of robbing two banks in one day. Officers were there to greet him as he stepped out of that second bank that afternoon.

MARIETTA, Ga. - Officers have arrested a Smyrna man accused of robbing two banks on the same day in Marietta.

John Chavis' bank robbery spree came to an end in the parking lot of the Bank of America on Cherokee Street Wednesday afternoon, the Marietta Police Department told FOX 5.

He exited the business where he was greeted, to his surprise, by several officers armed, ready to take him into custody," said Marietta Police Officer Chuck McPhilamy.

The department shared a photo of the takedown. 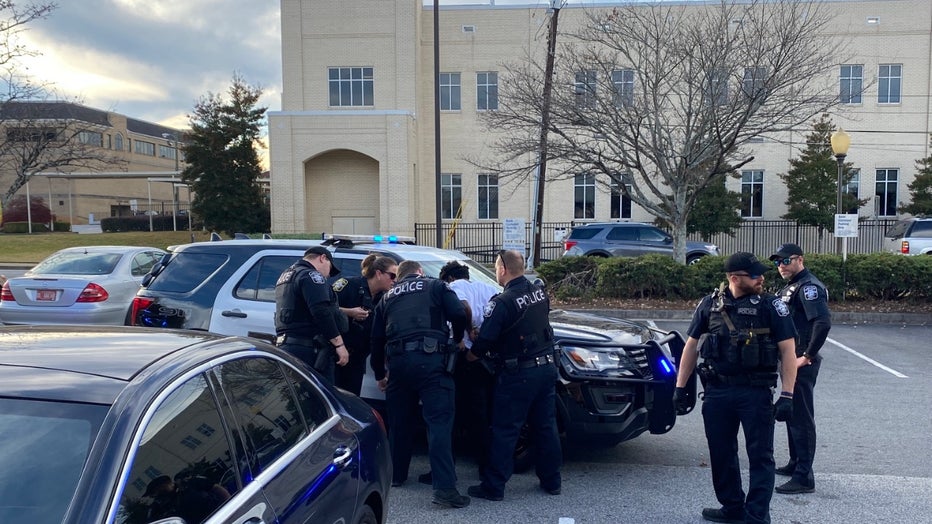 They responded in force after the 35-year-old Smyrna man entered the bank at around 3:30 that afternoon, and handed a teller a note demanding $5,000 cash. According to officers, Chavis kept a hand under a towel and motioned with it like he had a gun. Bank employees activated a silent alarm. Officers didn't want to spook the suspect who was still inside the bank when they arrived.

"Because it's on a major intersection, you had roads closed", said Officer McPhilamy. "You had police all around the backside of the business and you had unmarked cars in the front.  We needed to have vehicles around the building, but we didn't necessarily want that individual to know we were there and stay inside and become a barricaded hostage."

Police have identified Chavis as the suspect who robbed the Wells Fargo in 600 block of Roswell Street earlier that same day. The suspect made it out of the bank before police got there.

"It's a comprehensive program. What you saw yesterday was that program paying off." McPhilamy said.

Chavis is charged with multiple counts of felony robbery by intimidation and help without bond at the Cobb County Adult Detention Center.