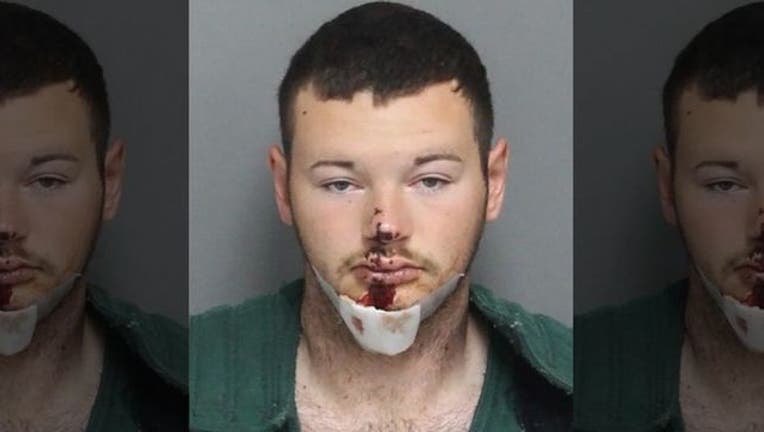 A domestic violence case in South Carolina this week led a man to fatally shoot a horse before holding a woman against her will and making her watch as he shot himself in the face with a shotgun — and survived, authorities said.

Colton Hurley, 20, suffered non-life-threatening injuries from the shotgun blast due to its placement and surrendered to deputies, Laurens County Sheriff’s Office said.

Deputies said Hurley had gone to the woman’s home, but she wasn’t there.  He waited and when she arrived in her car, Hurley rammed it with his pickup truck until the victim got out and ran.

Hurley pursued, tackled and assaulted her, police said. She was able to escape his grasp and get to a relative’s house.

Police said Hurley got a shotgun from a nearby house and shot a horse at point-blank range, killing the animal, before forcing his way into the home where the woman was hiding.

She held a small child in her arms as Hurley held her captive, police said. He then dragged her outside and made her watch as he shot himself in the face.

Hurley received treatment for his minor wounds and was charged with attempted murder, kidnapping, first-degree burglary, possession of a weapon during a violent crime, aggravated breach of peace, ill treatment of animals, unlawful neglect of a child, and two counts of pointing and presenting a firearm.

Sheriff Don Reynolds stated the following about the incident: “The Laurens County Sheriff’s Office is continuing my commitment to battle domestic violence in our Communities and will strive to assist domestic violence victim’s escape these type of volatile relationships. Hurley’s actions during this incident caused the victim to fear for her life and unnecessarily caused the death of an animal. Domestic Violence and the inhumane and ill treatment of animals will not be tolerated. We will continue to aggressively pursue prosecution of anyone who commits these types of crimes.”