An officer helped people escape the area where a train derailed in Lilburn this weekend.

Officer Almedin Ajanovic was finishing an off-duty job early Sunday morning when he heard calls about explosions and a train derailment.

He said he parked his car and ran toward the train.

"There was a large boom and then an explosion. Seeing that versus hearing it on the radio, it was definitely a scary moment," Ajanovic said. 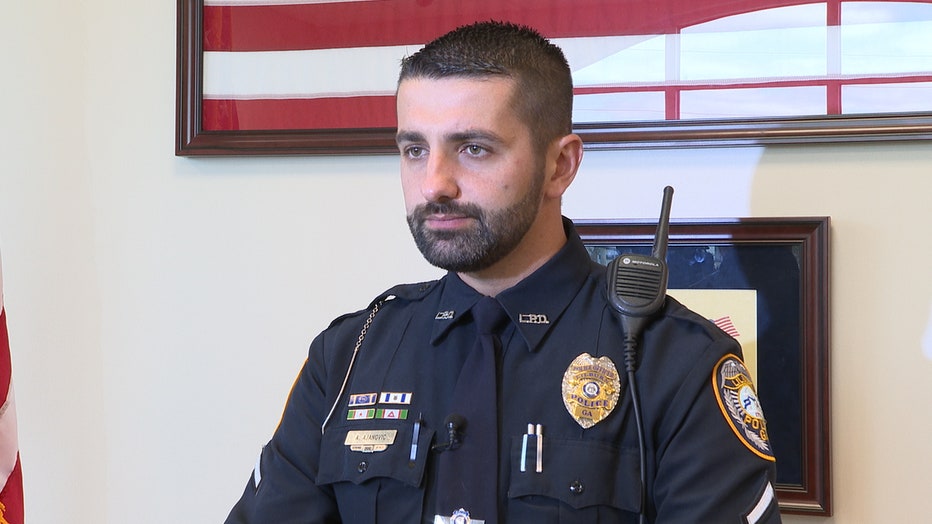 Despite the uncertainty, he was determined to get to the people who were at the scene.

"You just want to get there in time and help anyone that's in need," he said.

His body-worn camera captured the sound of people yelling in the darkness.

Ajanovic found the two crew members, who were on top of the toppled train that was leaking red fluid.

"I was a little nervous at the time because the creek was red. The train is on its side. It's partially in the water," Ajanovic said.

Because of how dark it was, the two men couldn't even figure out if there was dry land to step on if they got off the train.

They made it down safely with the help of Ajanovic.

All three walked back toward his car as he gave other first responders information about the wreckage.

That audio was also captured on his body-worn camera.

"There was an explosion earlier. At this point, it's just flames. I'm not sure if it's going to ignite again," he said. "There's a lot of hazmat material on the train."

CSX says the material inside of the damaged rail cars was ethanol and they believe the heavy rain and flash flooding contributed to the derailment.

Ajanovic says it's really astonishing things ended the way they did.

"Grateful they're both ok. We're all ok. I'm just grateful and speechless, just thinking about it. It gives me chills and I was very emotional," Ajanovic said.