The members of Congress demanded that prosecutors charge the suspect with a hate crime and the U.S. Department of Justice take a leading role in the probe.

ATLANTA - Members of Congress laid flowers Sunday at the three massage businesses in Georgia where a gunman killed eight people, six of them women of Asian descent, and demanded that prosecutors charge the suspect with a hate crime and the U.S. Department of Justice take a leading role in the probe.

The congressional delegation was led by members of the Asian Pacific American Caucus, which said Asian Americans have faced increased hostility since the outbreak of the coronavirus pandemic.

The lawmakers said they wanted to experience the shooter’s roughly 30-mile trip from Cherokee County, where police say he killed four people at Youngs Asian Massage, to Atlanta, where he is accused of shooting and killing four more people at two businesses across the street from each other.

New Jersey Rep. Andy Kim said he came to show solidarity with the local Asian American community and try to understand how it felt after the March 16 attack.

"As I come here, what comes to mind is the idea that this could have been anywhere," Kim, who is Korean American, said. "And that’s what makes us so fearful right now. We’re fearful because what happens next, what other violence could there be."

Kim later recalled crying the night of the shootings and struggling to explain them to his 3 and 5-year-old boys. 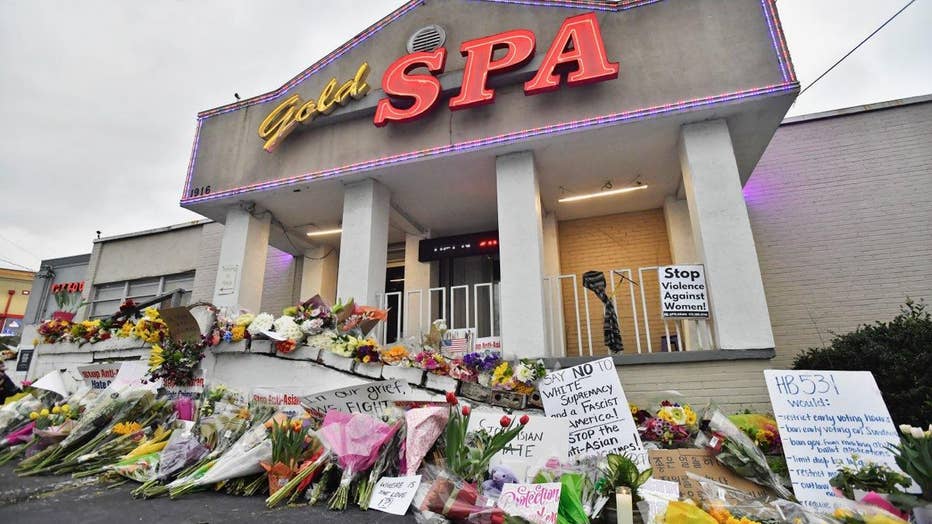 New York Congresswoman Grace Meng said she wanted to honor the lives of the victims, particularly the Asian women, whose "stories and lives are just as American as anyone else."

The lawmakers spoke outside Gold Spa, one of the shooting sites, where the ground was covered with bouquets and tree branches that spelled out, "Love." Signs read, "Asian Women Are Sacred" and "Stop Asian Hate." They also held a news conference in an Atlanta suburb and met with the families of two of the victims, Xiaojie Tan and Young A. Yue, and local leaders of the Asian American community.

Robert Aaron Long, the 21-year-old white man facing murder charges in the attacks, has told police he had a "sex addiction." Authorities have said he apparently lashed out at what he saw as sources of temptation. Long told police the shootings were not racially motivated, but those statements have spurred widespread skepticism given the locations and that six of the eight victims were of Asian descent.

"It is clear that this was a deliberate journey," said California Rep. Judy Chu, who chairs the Asian Pacific American Caucus. She added, "It is clear that you would not choose those three places unless you were targeting Asian women."

Chu said later she was concerned about comments she has heard from local investigators, including that the shooter was having a bad day and said he had a sex addiction. She said they were "improper" and wrongly cast doubt on whether the shootings were a hate crime. She said the Justice Department should use its resources to "call these murders a hate crime."

Mark Takano, another representative from California, said there were "plenty of non-Asian businesses" that the suspect could have hit on his trip from Cherokee County to Atlanta, so his actions "speak louder" than what he has said.

He called on the Justice Department to help local prosecutors, who he said may not have as much experience with hate crimes cases.

"We cannot allow the AAPI community to be gaslighted into thinking that this is not a hate crime," he said. "They see with their own eyes, and they feel what they feel."