ATLANTA - Gov. Brian Kemp has announced a new executive order that has extended Georgia's business restrictions and social distancing guidelines through the end of May.

The new executive order keeps bars and music venues throughout Georgia closed until May 31. Social distancing and sanitation guidelines must also remain in place through the end of May for all open businesses.

The order also relaxes some of the previous rules for the operation of restaurants by allowing up to 10 patrons per every 300 square feet and increasing party size at tables from six to 10 people. Gatherings of over 10 people are still banned.

Kemp said the order also doubles the number of children allowed in child care - allowing 20 children instead of the previous 10. 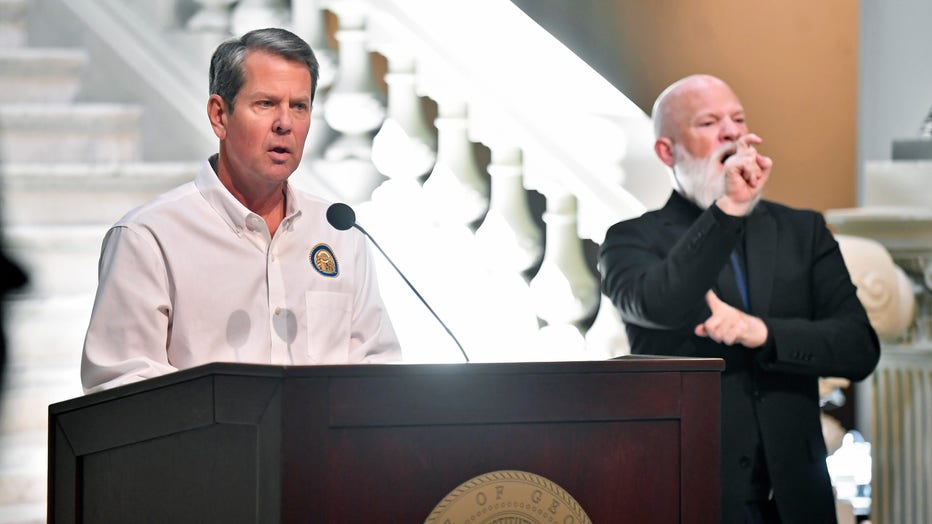 Gov. Brian Kemp giving an update on the fight against COVID-19.

On Monday, May 18, the state government will also begin a limited version of in-person business, Kemp said.

The governor also acknowledged Georgian's worries over the status of summer camps. He said that day camps can begin to operate starting on Thursday, May 14 provided they follow 32 new criteria. No overnight camps are allowed at this time, but Kemp said that could change depending on the spread of the virus.

On Monday, Kemp announced that the fewest ventilators were in use and the fewest patients confirmed to be positive for the coronavirus were in Georgia hospitals since the state began keeping those statistics on April 8. The number of hospitalized patients fell again Tuesday to 1,125 statewide, while the number of ventilators in use ticked up to 884.

As of Tuesday, Georgia was reporting more than 34,000 confirmed cases overall and 1,461 confirmed deaths from the virus.

Kemp said in the weeks ahead they are expecting to have over 1,000 employees working on contact tracing throughout the state. Georgia will also be new contact tracing online monitoring tool to help Georgians.

Concerns remain about geographic hot spots and disproportionate harm to African Americans and Hispanics. The Morehouse School of Medicine on Tuesday released a study that found that, even when accounting for differences in poverty, health insurance and population density, Georgia counties with higher shares of African American residents have higher shares of confirmed COVID-19 rates.

The Northeast Georgia Health System, a four-hospital group based in Gainesville, continues to warn that it could exceed the capacity of its staff to care for patients next week. The hospital system’s overall patient numbers have held steady in recent days, but the share of ventilators in use rose to 44 percent of capacity Tuesday. The region has large numbers of Spanish-speaking residents concentrated in poultry plants.

A COVID-19 model by Georgia Tech predicts the state's infections and deaths will continue to rise through mid-August, with a peak in cases somewhere between early June and mid-August.

Without strict social distancing, the designers of the models says their projections are “grim.”

Carr wrote that Congress and states should enact a “common-sense framework to provide liability protections for much-needed goods and services while still ensuring victims are able to seek legal redress and compensation where appropriate.”

Carr’s move came as businesses across the state continued to reopen. The YMCA of Metro Atlanta said it would reopen 19 of 24 facilities on a limited basis starting Friday. A whitewater rafting company said trips on the Chattahoochee River in Columbus would resume Saturday, but with new methods dictated by social distancing.

Another business getting back to normal is the state lottery. Brad Bohannon, the Georgia Lottery Corp.’s vice president for government relations, told the state House Higher Education Committee Tuesday that lottery sales recovered in April after dropping in March.

He said the lottery now estimates it will return more than $1.1 billion in profits to the state this year to finance college aid and preschool classes. Bohannon said the lottery anticipates raising its profit estimate again after May.

The state’s justice system remains frozen, though, after Chief Justice Harold Melton on Monday extended the statewide judicial emergency through June 12, barring jury trials and grand juries in most instances. The order has been in effect since March 14, with Melton saying courthouses remain unprepared to comply with social distancing and health precautions. Some courts are conducting hearings remotely.

Other governments are pushing for more mask use. The Augusta Commission on Tuesday ordered all employees and visitors to local government buildings to wear masks for 30 days beginning Thursday. Savannah Mayor Van Johnson asked the city’s lawyer to investigate whether the city could force all residents to wear masks.

In hard-hit Albany, the parent entity of Phoebe Putney Memorial Hospital said it would donate 50,000 masks to the “Mask Up Albany” campaign after the hospital’s foundation received donations to purchase 100,000 masks.

For most people, the coronavirus causes mild or moderate symptoms, such as fever and cough that clear up in two to three weeks. For some, especially older adults and people with existing health problems, it can cause more severe illness including pneumonia, and death.