Kelly Loeffler was sworn in Monday as Georgia's newest Senator

WASHINGTON, D.C. - Wealthy Republican businesswoman Kelly Loeffler was sworn in Monday as the newest senator from Georgia, a political newcomer who takes office amid a presidential impeachment, swirling tensions with Iran and at the dawn of what looms as a bruising national election.

Georgia GOP Gov. Brian Kemp appointed Loeffler to the vacant seat despite a preference by President Donald Trump and his conservative allies for Rep. Doug Collins, a Trump loyalist and top Republican on the House Judiciary Committee. Kemp’s choice of Loeffler was seen as a bid to court suburban and female voters, many of whom have reacted to Trump’s harsh rhetoric and hard-right policies by moving away from the GOP.

Loeffler was sworn in by Vice President Mike Pence. She replaces three-term GOP Sen. Johnny Isakson, 75, who stepped down in December because of health issues.

Kelly Loeffler to be sworn in as senator

Kelly Loeffler will be just the second woman in history to represent Georgia in the U.S. Senate.

Trump backers criticized Loeffler, 49, as too moderate and inexperienced when her appointment was announced in December. She has spent the past several weeks traveling Georgia and trying to win over conservatives with a “pro-Second Amendment, pro-Trump, pro-military and pro-wall” message.

She’s already said she plans to vote against removing Trump from office. “I don’t think there was due process followed in the House proceeding,” she said, providing no detail but echoing complaints by other Republicans. The Democratic-controlled House impeached Trump last month after he blocked White House officials from testifying or providing documents about allegations that he pressured Ukraine’s leader to provide dirt on Trump’s potential Democratic rival, Joe Biden.

Loeffler has won praise from Senate Majority Leader Mitch McConnell, R-Ky., who called her “a terrific appointment” and said the Senate GOP campaign committee will support her. She becomes the ninth Republican woman currently serving in the Senate, compared to 17 Democratic women. 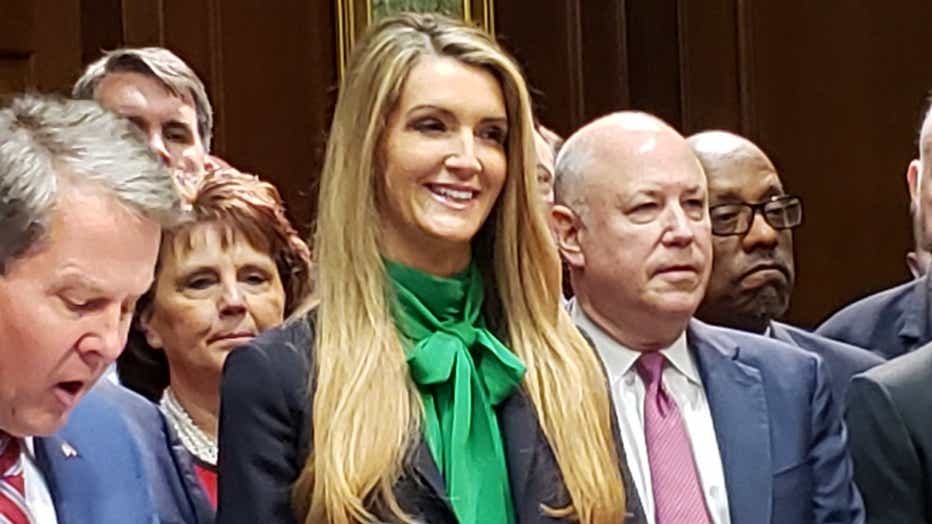 She previously served as an executive at Intercontinental Exchange, a behemoth founded by her husband that owns the New York Stock Exchange. When Kemp selected her, Loeffler was CEO of Bakkt, a financial services firm. She’s also an owner of the Atlanta Dream, a franchise in the Women’s National Basketball Association.

Loeffler will have to defend the seat in a special election in November, which under Georgia law will in effect be an open primary with candidates — perhaps multiple ones — from all parties. If one contender doesn’t win more than half the vote, the top two finishers will face a runoff on Jan. 5, 2021.

Çollins has declined to rule out challenging Loeffler for the seat in November. “We are looking at it, and we’ll be making a decision soon,” he said Sunday on Fox News Channel’s “Sunday Morning Futures with Maria Bartiromo.”

Loeffler has pledged to spend $20 million of her own money, spokesman Ryan Mahoney has said, on what will be her first political campaign. That’s left some Washington Republicans looking skeptically at a Collins run.

“She’s a real conservative, a Trumper, and she’s putting $20 million behind it,” said Scott Reed, chief political strategist for the U.S. Chamber of Commerce. “That’s called peace through strength.”

Also on Georgia’s ballot in November will be Republican Sen. David Perdue, who is seeking reelection. Having both of Georgia’s GOP-controlled Senate seats up for grabs this year has raised the state’s profile as a political battleground where Republicans still dominate but Democrats are looking for an upset.