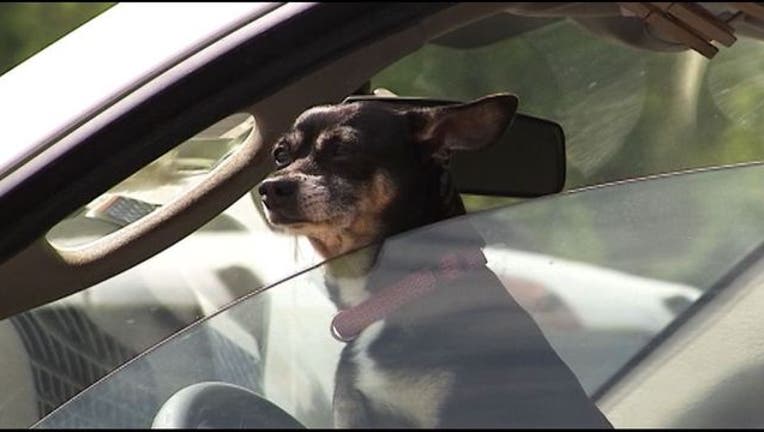 During the summer months, traveling with pets in the car tends to spike. A new AAA study shows pets are rarely restrained in cars. Whether it be short trips around town, or longer vacations, safety is important for those four-legged friends.

One in three pet owners admit to AAA that they never restrain their pet when they're riding in the car. But experts say taking your eyes off the road for two seconds to check on your pet doubles the risk of a crash.

Jennifer Rota knows it can be dangerous for her Jakey to ride in the car. "If you put on the brakes they can land in the front seat or get hurt in the back," she says.

She sees other dogs with their heads hanging out of the window all the time. "Leaning out the driver's side window, enjoying the ride, but that's a dangerous thing. You wouldn't have your child in your front seat with you, so i guess it's a dangerous situation that people should think about," adds Jennifer.

Doctor Clint Walton at Lavista Animal Hospital says most pet owners don't secure their animals. "A 10 pound dog may not sound like much, but once the physics get involved, depending on the severity of the crash that can be like a bowling ball flying through the car," explains Dr. Walton.

He recommends always restraining or crating your pet to keep them calm. "Sometimes they can get anxiety or motion sickness from watching things pass outside the window," he says.

A new AAA report says most drivers don't buckle up the four-legged friends because they're only taking them on short trips. Dr. Walton says the length of the trip shouldn't matter. "If they're not contained, they're just as in danger as us not wearing our seat belts, flying outside the window and two, the trauma of just being bounced around like a pinball in the car," Dr. Walton says

On top of their safety, they can also be a huge distraction for the driver. "There's those screens that can go across the driver’s seat and the passenger seat that will keep the dogs from getting into the front seat and that's probably a good idea, I should probably get one myself," Jennifer says.

Another reason not to let the dogs hang out the window, Dr. Walton says they can accidentally roll the window up on their heads or fall out of that moving vehicle.

He also says anxiety medications can help with pets that hate to travel and you can always try putting a towel or blanket over the cage, so they can't see what's happening outside the car.

There are dozens of pet harnesses and restraints to keep your tiny family member safe. For small dogs, there are plush beds that attach into to the seat belt. For bigger dogs, there's a harness with a short tether that can connect into the seat belt. Many of them are now being crash tested for safety.

AAA has more tips on how to travel with your pet: