MINNEAPOLIS (FOX 9) - A Hennepin County judge has dismissed the third-degree murder charge against former Minneapolis police officer Derek Chauvin, but denied the defense's motions to dismiss the other charges against him. Chauvin remains charged with second-degree murder and manslaughter in the death of George Floyd. 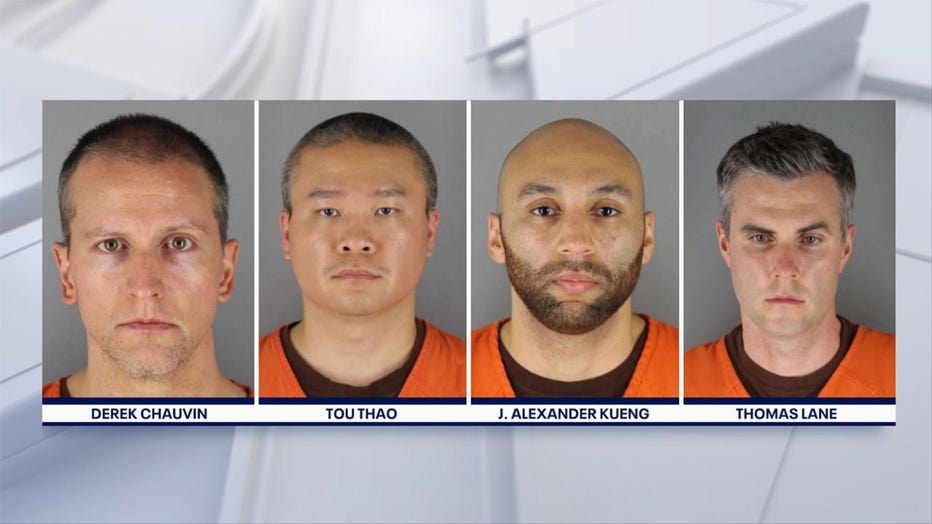 In his ruling, Judge Cahill said he dismissed the third-degree murder charge against Chauvin because that the statue does not fit the alleged crime as it requires that Chauvin put other people’s lives in danger with his actions, not just Floyd’s.

Judge Cahill stayed the dismissal of Chauvin's third-degree murder charge for five days to allow the state to appeal the ruling.

Minnesota Attorney General Keith Ellison called the judge’s decision to keep eight of the nine total charges against the four officers “an important, positive step forward in the path toward justice for George Floyd, his family, our community and Minnesota.”

Ellison said said his team is still weighing whether or not they will appeal the ruling.

While Minneapolis officials prepared for potential unrest over Cahill’s ruling, the leadership of the Minneapolis NAACP appeared to have little issue accepting it.

On the same day a judge dropped one of several charges against former Minneapolis police officer Derek Chauvin, activists held a rally against police brutality.

The legal team representing the Floyd family in their civil case, including national civil rights attorney Benjamin Crump, insisted they remain confident in Ellison. In a statement they said the attorney general will make sure “the officers are held accountable to the full extent of the law.”

Area activists also appear to be in support of the dismissed charge.

“I think it gives them less options in terms of what to do with that case, but at the same time it was not the right charge in the first place,” said Michelle Gross, President of Communities United Against Police Brutality.

Chauvin was arrested and charged with third-degree murder and manslaughter just four days after the Memorial Day death of George Floyd at the intersection of E. 38th Street and Chicago Avenue in Minneapolis. The charge was later upgraded to second-degree murder at the same time Attorney General Keith Ellison announced charges against the other three officers involved in Floyd's death.

May 26: All four officers involved in Floyd’s death—Derek Chauvin, Tou Thao, J. Alexander Kueng and Thomas Lane—are all fired from the Minneapolis Police Department after a bystander video of Chauvin kneeling on Floyd’s neck for more than eight minutes goes viral.

May 29: Chauvin is arrested and charged with third-degree murder and manslaughter.

June 4: George Floyd’s memorial service is held at North Central University in Minneapolis. It was a star-studded event capped off by a moment of silence for 8 minutes and 46 seconds.

June 10: Lane is the first officer to be released on bail.

June 15: A new 911 call transcript shows a 911 dispatcher called a Minneapolis police sergeant over her concern of the way officers were handling the deadly arrest of George Floyd the evening of May 25.

June 19: Kueng is released on bail.

July 4: Thao is released on bail.

July 7: The attorney for Thomas Lane files a motion to dismiss the charges against him, arguing there is not enough evidence to establish probable cause the former rookie officer committed a crime.

Lane and J. Alexander Kueng’s body-worn cameras, transcripts of the body camera videos and photos of the interior of George Floyd’s vehicle were all submitted as exhibits supporting the motion.

July 9: Judge Peter Cahill issues a gag order in the cases against all four former officers after at least two attorneys talked to the media.

July 15: Judge Cahill allows the media and public to view the footage from the body-worn cameras of former officers Lane and Kueng. The videos were available to view by appointment only and reporters were not allowed to record or share the body camera videos.

On the same day, George Floyd’s family files a federal civil rights wrongful death lawsuit against the City of Minneapolis and its police officers.

July 21: Judge Cahill dismisses the gag order after the defense argued it was not fair to the four former officers after so much had already been said about their actions. He also decided not to sanction Attorney General Keith Ellison, who the defense said violated the now-dismissed gag order about the case when he sent out a news release to the public introducing his full prosecutorial team.

July 29: The attorney for Thao files a motion to dismiss the charges against him, arguing there is not enough evidence to establish probable cause.

Aug. 7: Judge Cahill orders the body-worn camera footage from fired officers Lane and Kueng to be released to the public.

Aug. 10: The body-worn camera videos from former officers Lane and Kueng are released to the public. In the videos, Floyd appears alarmed by having Lane’s gun in his face when the officers approached his driver’s side window. The gun and its positioning appear to set the events in motion as Floyd becomes agitated and upset.

Aug. 12: The State of Minnesota files a motion to join the cases of the four Minneapolis police officers charged in Floyd’s death into one prosecution. The move means there would be one trial for all the officers, rather than four separate trials.

Aug. 13: The body-worn camera video from former officer Thao is released to the public. The video shows Thao trying to control the crowd while his fellow officers restrained George Floyd during the deadly arrest.

Aug. 14: The video of the Minnesota Bureau of Criminal Apprehension’s interrogation of former officer Thao is released. In the video, which lasts nearly two hours, Thao recounts what led up to George Floyd's death and that they went to Cup Foods as backup, saying they know the area to be dangerous. Thao told the BCA it was his suggestion they put a handcuffed Floyd onto the street after twice failing to put him, panicked and complaining of claustrophobia, into the back of a squad vehicle.

Aug. 18: The video of the BCA’s interrogation of former officer Lane is released.

Aug. 27: The attorney for J. Alexander Kueng files a motion to dismiss the charges against him and a motion to change the venue for the trial.

Aug. 28: The defense attorneys for Derek Chauvin file a motion to dismiss the charges against the former officer. In the court documents, the attorneys cite a lack of intent to prove the second-degree murder charge, saying the officers were acting to keep George Floyd under control and that Chauvin followed training when taking Floyd into custody.

Chauvin’s attorneys as well as those for Thao also file a motion asking for the location of the trial to be moved. The attorneys argue an impartial jury cannot be found in Hennepin County.

At the same time, the prosecution files a court document seeking longer sentences for all four officers charged in Floyd’s death.

Sept. 8: The attorney for Thomas Lane files a motion for a change of venue for the trial.  The defense attorneys representing all four officers also file an objection to the state’s motion to join all four cases and hold one trial.

Sept. 11: A motions hearing is held in the case, but Judge Cahill does not address the motions to dismiss the charges against the officers nor does he rule on either the state’s motion to join all for cases into one trial nor the defense’s motion to change the venue of the trial.

The judge disqualifies Hennepin County Attorney Mike Freeman and three other prosecutors in his officer from the case over a private meeting they had with the medical examiner, saying it makes them witnesses.

Oct. 15: An evidence hearing is held in the case. Judge Cahill rejects the state’s motion to restrict public access to new filings in the case for two business days before they can be released.

Body camera video of a 2019 arrest of George Floyd is released to the public. The defense is motioning to submit the footage of Floyd’s prior arrest as evidence, claiming it shows similar behavior from Floyd toward police as his deadly Memorial Day arrest.