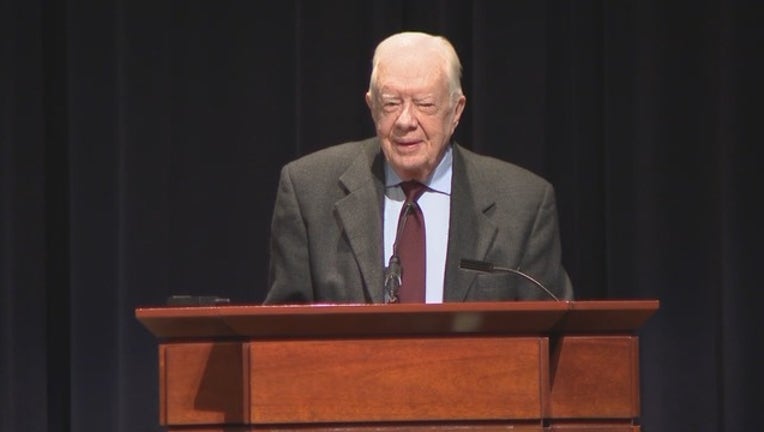 "Though he is progressing well, he underestimated the amount of time he would need to recover from his recent hip replacement," Carter spokeswoman Deanna Congileo said in a statement Saturday evening.

Carter, 94, broke his hip Monday as he was leaving to go turkey hunting.

Congileo said Carter apologized for any inconvenience to those who traveled to hear his lesson at Maranatha Baptist Church in Plains, Georgia.

Congileo said Carter's niece, Kim Fuller, will teach the lesson in his stead and, he says, "No one will be disappointed."

A devout Christian, Carter regularly teaches Sunday school in Plains, drawing hundreds of visitors for each session. He and his wife Rosalynn pose for pictures with each attendee.

Carter became the longest-lived president in U.S. history in March when his age surpassed that of former President George H.W. Bush, who died Nov. 30 at the age of 94 years, 171 days.

Nearly four years have passed since Carter revealed he had been diagnosed with cancer. Carter said in August 2015 he had melanoma that had spread to his liver and brain. He received treatment for seven months until scans showed no sign of the disease.