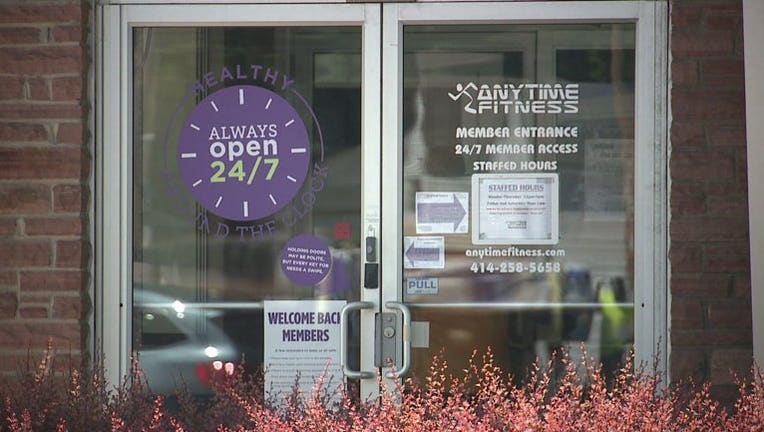 WAUWATOSA, Wis. (FOX 6) - An Anytime Fitness in Wauwatosa is catching major heat over posting a workout titled, "I Can't Breathe," TMZ reported Wednesday, June 10. Some have said the workout sign was wrong, if not racist. With controversy growing, the corporate office issued a statement slamming the workout. Members said they have a lot of questions, too.

Inside Anytime Fitness near North Avenue and Swan Boulevard in Wauwatosa, members are used to working up a sweat -- but the workout whiteboard had some hot with emotion Wednesday. 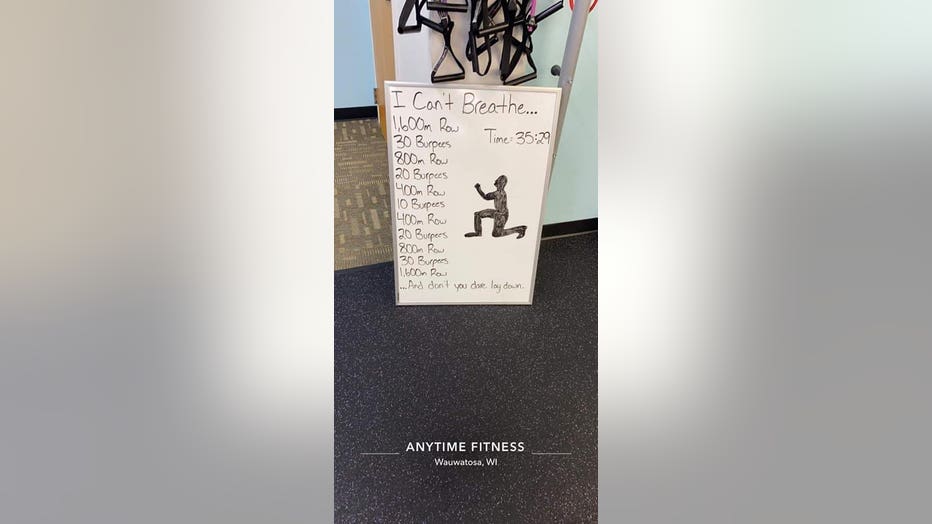 This 'I Can't Breathe' workout at an Anytime Fitness in Wisconsin drew wide scorn, including from the company itself. (Anytime Fitness)

"Very insensitive," said a member named Monica, who did not want to share her last name. "There are so many other productive ways to support the Black Lives Matter cause, and so many better ways to honor George Floyd. Doing burpees and rows is not a way to help."

Jen Dunnington, co-owner of the Anytime Fitness gym in Wauwatosa, told TMZ one of her trainers attempted to "honor" George Floyd by posting the 35-minute workout for members. The sign featured the words, "I Can't Breathe" and, "Don't you dare lay down" with a drawing of a kneeling person.

"It's obvious that he's trying to demean it because what's the sense of posting it?" said Leon Ward, passerby.

According to TMZ, Dunnington said the group of exercises was meant to "be a workout so hard that we felt what he felt." Dunnington told TMZ she regrets the sign's verbiage, saying, "I deeply apologize." Members told FOX6 she posted a tearful, five-minute video apology on Facebook that was later deleted.

"I'm sorry if you were offended -- kind of putting the onus on the people who took offense, as opposed to taking ownership," said Monica. "Yes, this was insensitive, wrong and racist."

"I was not aware of the signage -- that it was posted in that way," Dunnington told TMZ. "I didn't read it in that way, but I do definitely apologize that those words were on there."

According to TMZ, Dunnington said the "I Can't Breathe" line was meant to be a motivator -- calling the line a rallying cry used by protesters all over the country. As for the "lay down" line, Dunnington told TMZ, "I apologize that it said that. The line on there should not have been on there."

FOX6 News made several attempts Wednesday to reach the owners of Anytime Fitness in Wauwatosa. We did reach a personal trainer by phone, but he hung up on us.

Anytime Fitness in Wauwatosa issued the following statement on their Facebook page:

"To our members, employees and community:

We are terribly sorry for our actions this week by offering an “I Can’t Breathe” workout. No matter our intent, we now recognize how deeply offensive our words, illustrations and actions have been. One of the publicly-stated commitments to antiracism work by the owner of the Anytime Fitness brand, Self Esteem Brands, is to bolster education efforts for its franchise owners to lead with empathy, love and respect. We obviously have work to do within our own location, and we will work hard to earn back your trust and respect. We stand with our black community, and again, we are so very sorry for this insensitive move."

"As the co-founders of the Anytime Fitness brand, we were extremely disappointed to learn about the “I Can’t Breathe” workout promoted by the AF franchise location in Wauwatosa, Wis.

"The franchise owner of the Wauwatosa location has taken full responsibility for the actions of his location. The trainer who created and promoted the “I Can’t Breathe” workout has been placed on leave and his employment status is under review. Additionally, the owner and his entire staff have volunteered to be the first ones to participate in the antiracism training that we announced last week and are providing for all franchise owners across our portfolio of brands.

"Under the Anytime Fitness franchise model, owners make independent decisions about local promotional activities for their gyms. However, regardless of their original intent, the actions of the Wauwatosa location were offensive, insensitive and inconsistent with our brand values. We understand the deep hurt that this gym’s actions have caused for many of our members, and we truly apologize that this happened.

"This experience has further galvanized our commitment to antiracism education within our franchise network. To our employees, franchise owners, members and communities – especially those who are black, Indigenous, and people of color – we deeply regret today’s events, and we will continue to learn from these experiences. Our commitment to eliminating racism within our business is stronger than ever."

"As leaders of Self Esteem Brands and the Anytime Fitness brand, we were shocked and devastated to see that one of our franchise locations chose to offer an “I Can’t Breathe” workout. No matter the intent, we absolutely do not condone the words, illustrations or actions this represents. To our employees, owners and members, we are truly and profoundly sorry that this incident occurred. One of our publicly-stated commitments to antiracism work is to bolster training efforts for our franchise owners to lead with empathy, love and respect. This incident makes it clear that we have work to do in this space; immediately, we are sharing this incident with our franchise owners worldwide as an example of what not to do, why it is offensive, and what locations should be doing instead. We remain committed to working to inform and educate employees and owners worldwide to stand for our black communities including our members and employees."

“As elected officials representing Wauwatosa, WI, we denounce Anytime Fitness’ “I Can’t Breathe” workout regimen.  For the last fourteen days our nation has protested the death of Mr. George Floyd, whose inability to breathe led to his death.  Mr. Floyd’s murder has served as a catalyst for change throughout our state, country, and the world.  The symbolism of the breath stolen from George Floyd as he begged for his life while pinned to the ground, is not something we take lightly and most definitely not something that should have been used to promote an exercise program.

"In the wake of Mr. Floyd’s death, many residents—including those living in Wauwatosa—have taken to the streets to protest disparate treatment of people of color.  Wauwatosa’s residents have collectively amplified their voices to empathize and begin to reevaluate practices that perpetuate systemic racism in our community.  Nothing about the past fourteen days should have given anyone, let alone a business owner, the inkling that this workout was appropriately named.

"So, as state legislators representing Wauwatosa, we call on Anytime Fitness to commit to doing the work necessary to weeding out any undercurrents of racism and/or ethnic insensitivity to prevent actions like this from ever happening in one of your facilities ever again.

"Anytime Fitness’s franchise owner and corporate office have issued an apology to their employees, members, and owners.  However, for many, the words rang hollow. The harmful impact of such an offensive act, extends to all of us.  An apology was owed to everyone. We will not tolerate the glorification of death, the perpetuation of systemic racial violence, or engagement with racism in any way other than complete and total condemnation.

"Across Wauwatosa we have seen our community come together, we have marched, we have committed to creating a better world.  We wish to move forward together.”