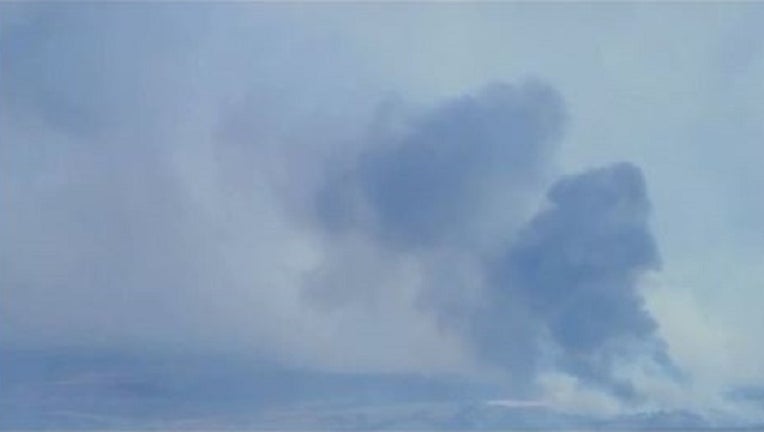 OKLAHOMA CITY (AP) - An Oklahoma turkey hunter was found alive but badly burned Friday after spending the night trapped by one of two wildfires raging in northwestern Oklahoma that forced about 1,400 people from their homes.

The fire that trapped the hunter began Thursday afternoon near Leedey, about 110 miles (177 kilometers) northwest of Oklahoma City and has burned about 82,000 acres (331 sq. kilometers), Oklahoma Forestry Services spokeswoman Michelle Finch-Walker said. Three hunters were trapped, but two were rescued.

The man who was burned was hospitalized in serious condition, Finch-Walker said.

"Your property is not worth your life," he said. "Evacuate and leave it to the firefighters."

The fire also resulted in the evacuation of Vici, a town of about 750, about 20 miles (32 kilometers) north of Leedey. Most Vici residents were able to return home Friday.

A second fire has burned more than 120,000 acres (485 sq. kilometers), several homes and forced the evacuation of about 450 people from their homes near Woodward, about 40 miles (65 kilometers) north of Leedey, according to Woodward County Emergency Management Director Matt Lehenbauer.

Finch-Walker said neither of the fires has been contained.

Sally Loyd, who lives with her 16-year-old son near Vici about 10 miles (16 kilometers) south of the Woodward County fire, said she could see the flames, but did not evacuate.

"Not much sleeping just a lot of watching," Loyd said. "I did get out and drive around .... but extremely scary," Loyd said.

She said they drove with her son until they saw the lights of emergency vehicles and ash from the fire on the roadway, then turned and went home.

The National Weather Service says dangerous fire weather conditions are expected in much of western Oklahoma and the Oklahoma Panhandle through Saturday, with low humidity and strong winds of 20-30 mph (32-48 kph) and gusts of up to 50 mph (80 kph).

"Every time we have a wind shift, we have a finger of that firebreak off and it'll move in a different direction," Lehenbaur said. "We're looking at a really, really rough day."

Gov. Mary Fallin declaring a state of emergency for 52 of the state's 77 counties in the western two-thirds of Oklahoma.

Lehenbaur said federal assistance in the form of firefighting personnel and equipment, including aircraft, has been sent to help battle the flames.