The president posted to Twitter, addressing Congress, asking it to amend the COVID-19 relief bill and eliminate the unnecessary spending.

House Democrats are planning to force a vote this week on increasing the size of the stimulus checks included in the $900 billion coronavirus relief package after President Trump demanded Congress raise the payments from $600 to $2,000 per adult.

In a video address Tuesday night, Trump called the proposed stimulus checks of $600 included in the economic relief bill that Congress passed Monday "ridiculously low" and said the payments should be more than tripled — a proposal that many Democrats immediately lined up behind.

"I’m in. Whaddya say, Mitch?" Senate Minority Leader Chuck Schumer tweeted. "Let’s not get bogged down with ideological offsets and unrelated items and just DO THIS! The American people deserve it."

"At last, the president has agreed to $2,000," House Speaker Nancy Pelosi wrote on Twitter. "Democrats are ready to bring this to the floor this week by unanimous consent. Let's do it!"

A source told FOX Business that Democrats will attempt to pass a standalone bill for $2,000 direct payments on Thursday, although it's unclear whether it would receive the unanimous consent needed to pass in the House or clear the Republican-controlled Senate.

Under House and Senate rules, a measure can pass each individual chamber so long as no one member objects. Sen. Ron Johnson, R-Wis., last week blocked a similar effort by Sen. Josh Hawley, R-Mo., to pass a proposal that would have sent a second cash payment of up to $1,200 to millions of adults and $500 checks to their children. 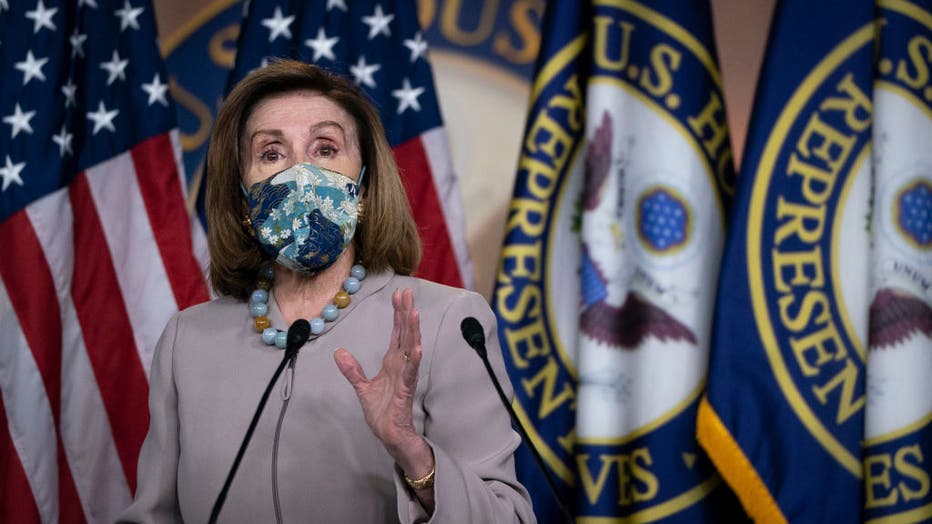 But some GOP lawmakers signaled a willingness to work with Democrats to give the president what he wanted. Sen. Lindsey Graham, R-S.C., said he does "appreciate" Pelosi's willingness to support Trump's "idea to increase direct payments."

"The American people are hurting and deserve relief," Graham said. "I know there is much bipartisan support for this idea. Let’s go further."

Hawley also applauded Trump's comments in the video and renewed his push for a bigger stimulus check.

"@realDonaldTrump is right - workers deserve much more than $600, as I have repeatedly said & fought for," he wrote. "And there’s obviously plenty of $$ to do it - look at what Congress threw away on corporate giveaways & foreign buyouts. Let’s get it done."

Trump's sudden push for a bigger stimulus check comes after a half-year of arduous negotiations between Democrats and Republicans over the size of the next round of emergency aid. After months of stalled talks, the two sides finally reached a compromise Sunday night and moved quickly the next day to pass the $900 billion relief measure, which was attached to the $1.4 trillion omnibus spending bill.

Trump has not said whether he will veto the relief measure for millions of Americans, but called it a "disgrace." If the president refuses to sign the legislation, the consequences would be severe: Millions of Americans would lose their unemployment benefits the day after Christmas when two federal programs expire just as the economy teeters on the brink of another slowdown, and the government would shut down Monday.

Senate Majority Leader Mitch McConnell has not responded publicly to Trump's criticisms as of Wednesday morning.

In addition to sending up to $600 checks for Americans earning less than $87,000, the stimulus measure extends boosted unemployment benefits by $300 a week through mid-March, reopens the Paycheck Protection Program and provides more funding for vaccine distribution.