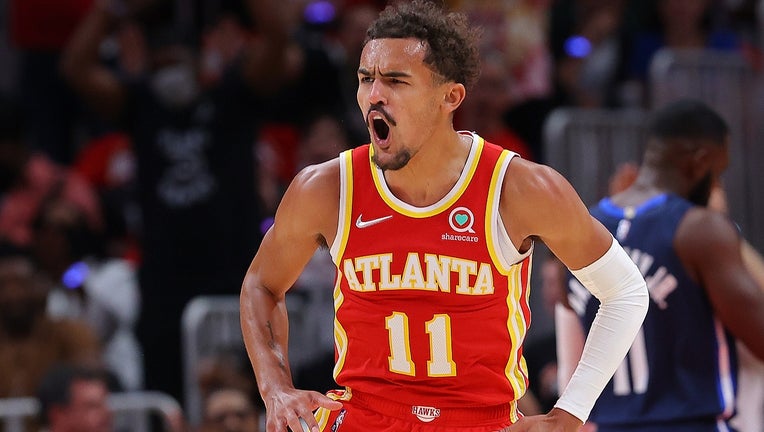 Trae Young #11 of the Atlanta Hawks reacts assisting on a dunk by Clint Capela #15 against the Dallas Mavericks during the first half at State Farm Arena on October 21, 2021 in Atlanta, Georgia. NOTE TO USER: User expressly acknowledges and agrees th

ATLANTA - Cam Reddish scored 20 points, Trae Young added 19 and the Atlanta Hawks began a season of high expectations with a 113-87 rout of Luka Doncic and the Mavericks on Thursday night, ruining the debut of Dallas coach Jason Kidd.

Coming off a surprising run to the Eastern Conference final, the Hawks took control of the game with a dominant third quarter, stretching a 51-44 halftime lead to 86-64 heading to the fourth.

After a sluggish start, Young scored 12 points and dished out nine assists in the decisive period, drawing chants of "MVP! MVP!" from the home crowd in the very first game.

Reddish led a stellar effort from the deep Hawks bench, which contributed 44 points.

The Mavericks were thoroughly miserable in their first game under Kidd, who had not been a head coach since he was fired in Milwaukee during the 2017-18 season.

A member of the NBA’s 75th anniversary team, Kidd took over in Dallas after longtime coach Rick Carlisle stepped down on the heels of a first-round playoff loss last season.

It was only one game, but it looks like the Mavericks have plenty of work to do if they want to take the next step behind their dynamic young star.

Doncic was held to 18 points on 6-of-17 shooting, to go along with 11 rebounds and seven assists. He didn’t get much help from anyone except Jalen Brunson, who scored 17 off the bench.

In the unending comparison between Young and Doncic, who were traded for each other during the 2018 draft, the Atlanta point guard was the clear winner in this one.

Mavericks: Doncic played his 200th game in very rarified territory. He had already joined Oscar Robertson as the only players in NBA history to reach 5,000 points, 1,500 rebounds and 1,500 assists by that career landmark.

Hawks: F Danilo Gallinari was ruled out with a nagging shoulder injury. Solomon Hill moved up to fill Gallinari’s spot on the second team. ... Dominique Wilkins received a standing ovation when he was introduced during the first timeout as one of the NBA"s 75 greatest players as part of the league’s 75th anniversary celebration.

Mavericks: Travel to Toronto to face the Raptors on Saturday. Dallas will finally play its home opener next Tuesday against the Rockets.

Hawks: Head to Cleveland to face the Cavaliers in their first road game Saturday.