Police said the two men seen breaking into a Griffin pharmacy may be responsible for several other similar break-ins.

GRIFFIN, Ga. - Several agencies have joined forces to try to catch two suspects investigators believe are responsible for a series of pharmacy break-ins across north Georgia. The most recent one was in Griffin and was caught on surveillance video.

Police released the video of the burglary at the Hospital Discount Drugs on South 8th Street that investigators said happened during the overnight hours of June 6 and 7.

The security cameras caught the two individuals hopping over the counter and running through the area of the pharmacy where prescription medication is stored.

"You could tell when they were searching that they were looking for something very specific. The only thing that we know that they had gotten out of the store was not was cough syrup with codeine, but we’re still waiting on more information from the pharmacy," said Laurie Littlejohn, Griffin Police Department. 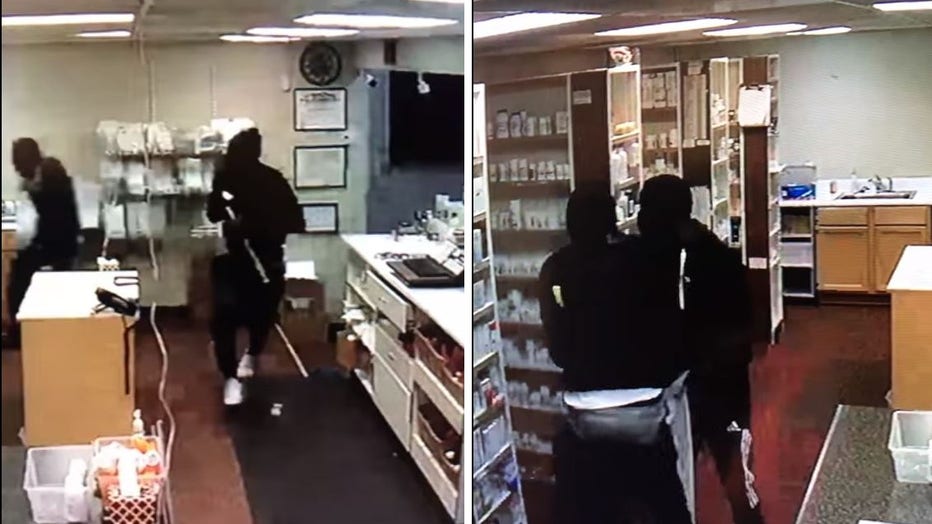 The men are wearing masks and gloves, but investigators said one of the things that stood out was one of the suspects wore white tennis shoes with a black Nike swoosh.

"They had their own bags, they had ski masks and gloves, they were pretty much covered from head to toe," said Littlejohn.

The burglary of the Griffin pharmacy, which is located across from Wellstar Spalding Hospital, may be connected to other similar burglaries across the state, investigators said. The Griffin police have reached out to several agencies to compare notes and see if there are any links.

"Out investigator, Sgt. Walden, has been in contact with several other agencies who had crimes very similar to this and they’re working together to see if they can’t come up with suspects or more information," Littlejohn said.

Anyone with information that could help identify either suspect is asked to call investigators at 770-229-6450, ext. 507.