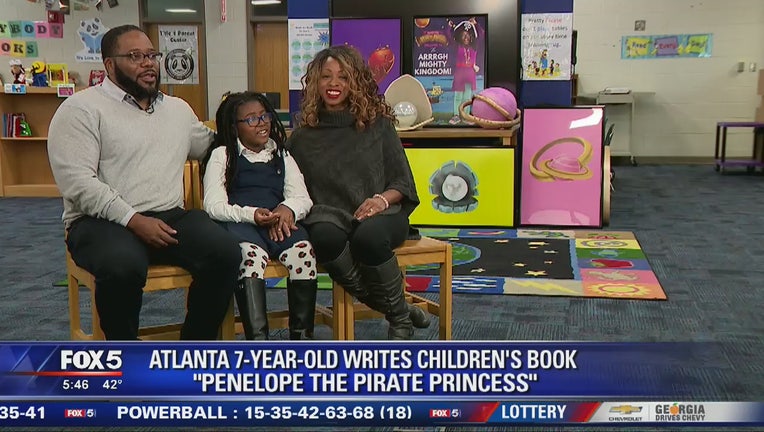 Selah Thompson is only 7 years old but she's already made an accomplishment that some folks may have on their bucket list.

"Penelope the Pirate Princess," nationwide. 7-year old Selah is also the founder and visionary behind the nonprofit Empowered Readers Literacy Project which launched with a Children's March for Literacy in January and has since planted Little Free Libraries in several communities around the city.

Legoland in Buckhead is hosting a special event this December called Holiday Bricktacular.

It’s going to be a white (and blue and red and green, etc.) Christmas this year at LEGOLAND Discovery Center Atlanta, thanks to a special December event called the Holiday Bricktacular. It's basically a Winter LEGO-Wonder-LAND of special events and attractions, all themed around the holidays.

Activities include building (and taking home) LEGO snowflakes, photo opportunities with Rudolph from Atlanta’s Center for Puppetry Arts, and the Jolly Old Elf himself LEGO-style, of course.

And yes, LEGO Santa keeps a naughty and nice list, too — so you better be on your best behavior. Speaking of,

LEGOLAND Discovery Center Atlanta is also hosting Breakfast with Santa on Saturdays — the cost is $45.95 per person, and includes admission to LEGOLAND.

Regular hours at LEGOLAND Discovery Center Atlanta are 10 a.m. to 7 p.m. on Sundays through Fridays, and 9 a.m. to 9 p.m. on Saturdays (last entry is always two hours before closing time). The Center is located at Phipps Plaza in Buckhead.

Christmas tradition of Elf on the Shelf

Atlanta's own Chanda Bell stops by Good Day to talk about celebrating the Christmas tradition of The Elf on the Shelf.

Elf on the Shelf:

As you keep families informed on all things Christmas, it’s important to remember the fragile spirit of the season that must be kept alive for children all over the world! Kids believe in Santa’s Scout Elves just as fiercely as they believe in Santa, and they derive great joy from thinking about, writing to and interacting with them.

Good Day's Katie Beasley sits down with a once-married couple who says getting a divorce helped their relationship.

Nikki Debartolo and Ben Heldfond didn’t find their happily ever after through marriage, but that doesn’t mean that they couldn’t find it through their divorce. "Our Happy Divorce" tells the story of how one of the most fateful things that can happen to a relationship, ended up bringing the two closer than they ever thought possible. The former couple admit their faults, accept their strengths and prove that they’ve learned quite a lot through a very trying time.

Nikki and Ben offer readers an inside look at their experience with divorce while providing a not-so-rare glimmer of hope to other couples who might be going through the same thing, especially in the realm of complicated co-parenting. This unique, raw and very real representation of ‘making it work’ is inspiring to all audiences alike.

In her cult-classic "The Dude Diet," chef and recipe developer Serena Wolf dared go where no healthy living cookbook had gone before: into the realm of dude food. From wings and nachos to burgers and pizza, Serena offered clean(ish) junk food makeovers that inspired dudes everywhere to put down the takeout menu and pick up a spatula.

Now, The Dude Diet Dinnertime gives those same hungry dudes — and their families — dozens of drool-worthy main course dishes. In "The Dude Diet Dinnertime," Serena gives you 125 foolproof recipes to satisfy every craving and please every member of the family. With soon-to-be classics like Super Sloppy Josés, Turkey Reuben Patty Melts, Chicago Dog Baked Potatoes and Chicken Parm Quinoa Bake, Serena shows comfort food fanatics and picky eaters alike how to get a delicious, nutritious, and filling dinner on the table without a fuss—and sometimes in 30 minutes flat.