A herd of goats was spotted wandering in Buckhead. Police, animal control personnel and volunteers helped the owner safely transport them from the area they were grazing outside of Rooms To Go on Peachtree Road. No injuries to people or goats were reported.

BUCKHEAD - A busy sidewalk in Buckhead became a temporary petting zoo on Monday as FOX 5 Atlanta followed a herd of goats that escaped from a worksite.

The goats were calmly grazing outside of a Rooms To Go near the intersection of Peachtree Road and Piedmont Road as the SKY FOX 5 hovered on Monday morning.

Police officers and volunteers set up a perimeter of netting to contain the goats. At around 12:30 p.m., a truck arrived to transport the goats safely back to their worksite. 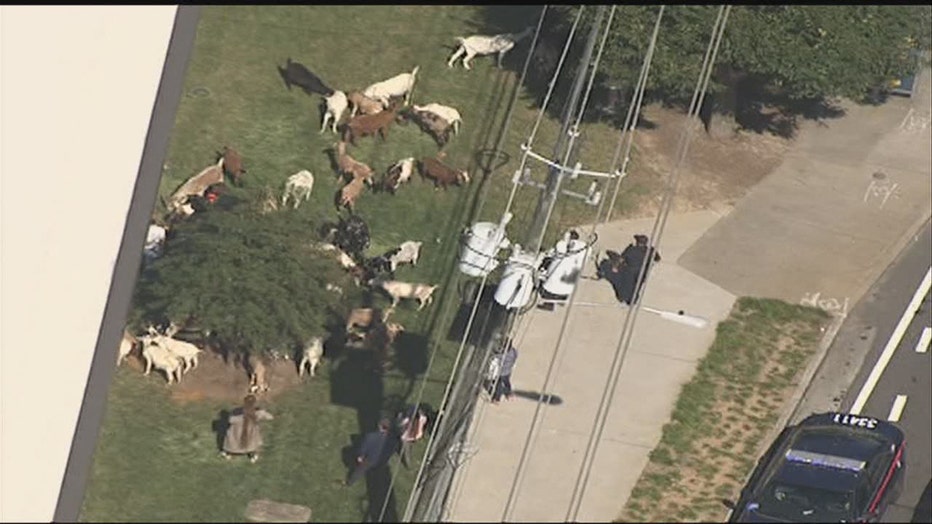 SKY FOX 5 is following a herd of goats that are loose in Buckhead. The goats appeared to be calmly grazing outside of a building.

Atlanta police responded to the area after a driver called to report the goats were wandering in the road. Animal Control came and the owner came to the area to remove them. Police reported no injuries were reported.

The goats belong to a nearby business, Get Your Goats. The owner said businesses rent goats to eat vegetation to clean out overgrown underbrush. They're an alternative to using heavy machinery or toxic chemicals.

He said about 40 goats were on the job grazing behind a nearby Kroger before they escaped.

"Something has disrupted the fencing or the area we put them," he said. "Generally this does not happen." 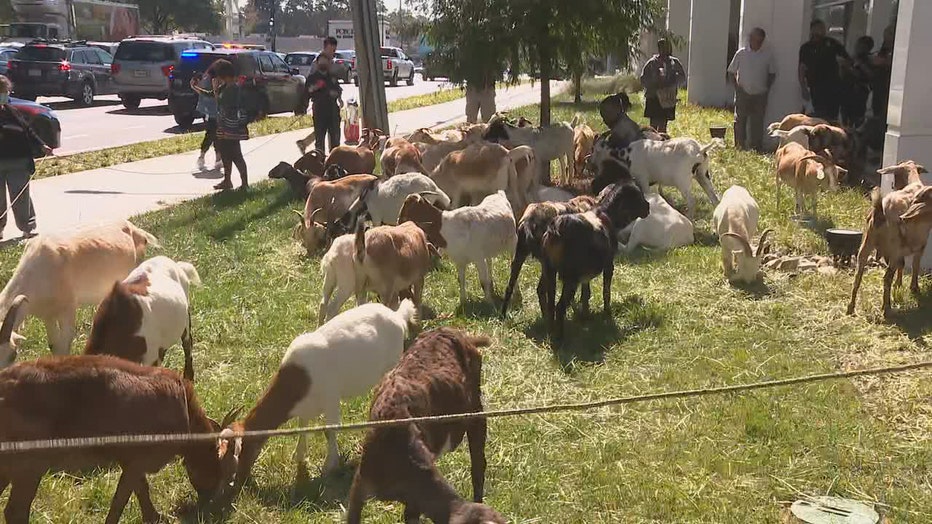 A herd of goats graze outside of a building in Buckhead. (FOX 5 Atlanta)

He was talking to local personnel, strategizing how to transport the goats safely.

Cam Ashling, co-owner of nearby Buckhead Goats, said none of the goats were hers, but she was helping police at the scene.

"If you get a couple of them to go, the rest will follow," she said.

She said the goats would be calm while they ate.

While emergency personnel and volunteers worked to safely move the goats, the area was a temporary petting zoo.

A Buckhead area business owner Crystal Morris called the scene "beyond odd." She was on her way to work with some iced coffee when she came across the scene.