Secretary Brad Raffensperger says as of late Wednesday morning around 200,000 ballots remain to be counted.

ATLANTA - Georgia is working to process around 200,000 absentee and mail-in ballots that still remain uncounted after Election Day.

Speaking at a press conference Wednesday, Georgia Secretary of State Brad Raffensberger said that his team plans to have the full count done by the end of the day and has sent reminders and requests counties to ensure that they complete their processes.

While voting on Election Day ran pretty smoothly in Georgia, larger problems arose during the counting process in metro Atlanta.

RELATED: Biden, Trump locked in tight race in key states with no winner yet announced

The secretary of state estimated that there were around 52,000 uncounted votes in DeKalb, 74,000 absentee votes and 43,000 early votes in Fulton County, 7,000 votes in Forsyth, among other counties.

"We're just knocking those down one at a time," he said.

In sharp contrast to the hours-long lines during previous votes, Georgia's Secretary of State's Office applauded the largely smooth election day, citing only a few hiccups in places like Spalding and Morgan counties.

But problems arose during the counting process in parts of the metro Atlanta area.

At 8:30 a.m. Wednesday, counting of absentee ballots resumed at State Farm Arena with the hope that it will be finished by the afternoon.

Gwinnett and DeKalb, which both lean left as well, also joined the list of counties still in limbo.

Some 80,000 absentee ballots in Gwinnett County need further review after a software malfunction with the machines scanning the county's unique two-page ballots. 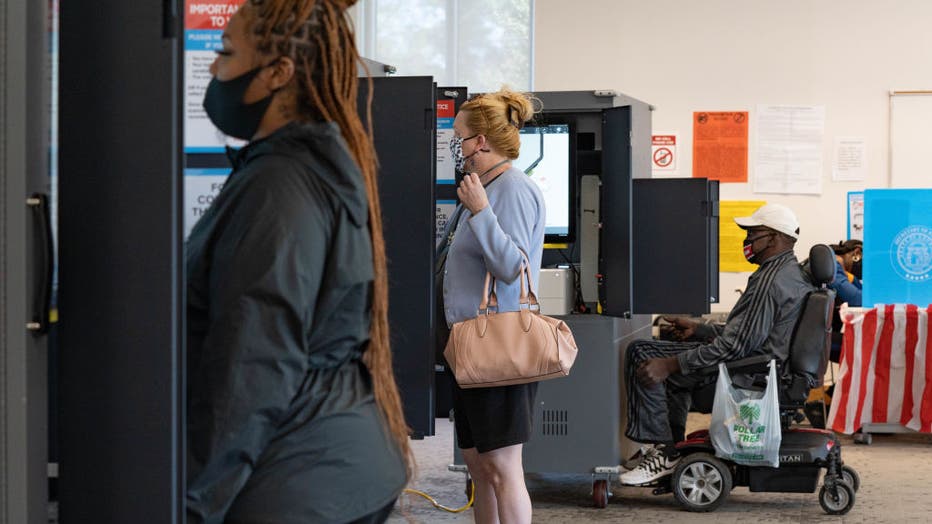 Voters cast their ballots at The Metropolitan Library in Atlanta.

"Gwinnett County is the only county in Georgia that sent a two-page absentee by mail ballot, printed front and back, because the ballot is in both English and Spanish," a Gwinnett County official told FOX 5.

Still, the board of elections pushed the results through "in order to provide the best representation of votes in Gwinnett County. They made this decision knowing the ballots would have to go through adjudication again and knowing that the results will change."

In DeKalb County, while results are nearing completion at 99 percent reported, some absentee ballots still need to be tabulated.

On Twitter, Cobb County officials said that, while results pages may have 100% of its precincts reported, workers are still processing absentee ballots.

After the votes are processed, the Secretary of State's Office will do a statewide audit of the results in order to give "people additional assurance" that the results are accurate. By Friday, Nov. 13, the state will certify the results of the election.

Trump and Biden are locked in a tight contest to secure the 270 electoral votes needed to win the presidency. Early Wednesday, Trump prematurely claimed he carried Georgia — and several other states that were too early to call.

“It’s ... clear that we have won Georgia. We’re up by 2.5%, or 117,000 (votes) with only 7% (of the vote) left” to count, Trump said during an early morning appearance at the White House. He also said he planned to contest the U.S. presidential election before the Supreme Court. It was unclear exactly what legal action he might pursue.

As of noon Wednesday, 4% of the vote is still left to count, with Trump currently up by slightly more than 100,000 votes, the Associated Press reported.