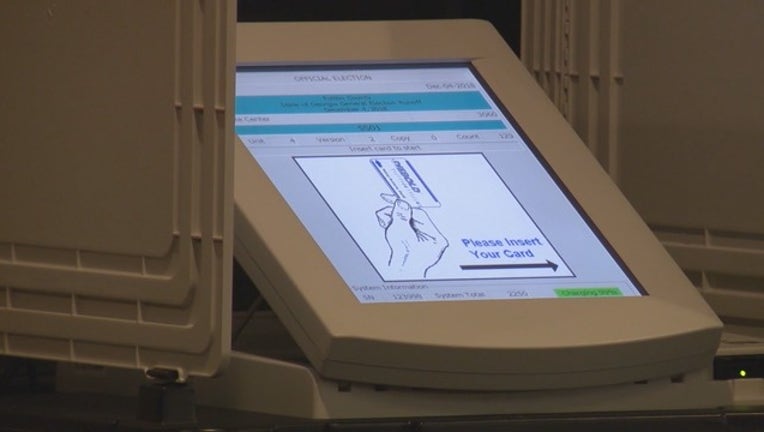 ATLANTA (AP) - Georgia's new elections chief asked lawmakers Wednesday for $150 million to replace the state's outdated electronic voting machines. In doing so, he all but closed the door on a hand-marked paper balloting system that experts say is cheapest and most secure.

Secretary of State Brad Raffensperger told Georgia legislators meeting for budget hearings that a new voting system is his top priority. Cybersecurity experts and voting integrity activists say the touch-screen machines Georgia has used since 2002 are vulnerable to hacking and can't be audited effectively because they produce no verifiable paper record.

The current machines and Georgia's registration practices became the subject of national criticism during last year's governor's race between Democrat Stacey Abrams and Republican Brian Kemp. Kemp served as secretary of state and refused calls to resign from overseeing his own election. He stepped down two days postelection after declaring himself the winner.

Two main systems offered by election equipment vendors have been considered as a replacement. Ballot-marking devices have an electronic touch screen where voters make choices and then print a paper receipt that is read by a scanner. The other system has hand-marked paper ballots that are read by an optical scanner.

Although Raffensperger said the procurement process for the new system would not have a "predetermined outcome," he told lawmakers he believed a system with ballot-marking devices would be faster and more accurate.

"We believe that you get a better result, a more accurate result, and are actually able to move people through the lines faster when you have a ballot-marking device, so you don't have to cipher out what someone meant with stray marks," Raffensperger said.

The amount requested is also in line with the more costly ballot-marking systems.

Raffensperger's presentation followed a study committee's recommendation earlier this month to use ballot-marking devices over hand-marked paper ballots by a 13-3 vote.

Commission co-chairman Barry Fleming, a Republican state representative from Harlem, previously estimated initial expenditures would be roughly $50 million for a hand-marked paper ballot system and about $150 million for a ballot-marking machine system.

Lee explained why he favored hand-marked paper ballots in an opinion piece published by the Atlanta Journal-Constitution last week.

"Paper provides the trail of evidence for post-election audits to determine if software caused an error in election outcomes and does so without re-running an entire election. Paper is human readable and manually countable when needed," Lee wrote.

The legislature next will have to rewrite election law to specify requirements for the new machines. Many Democrats have vowed to continue pushing for hand-marked paper ballots.

Then, Raffensperger's office will handle the procurement in line with the change in the law.

Raffensperger said that, ideally, the state would have new machines in place in some cities for municipal elections in November 2019, before having them fully online across the state before November 2020.

He said the funding would cover getting the new machines, decommissioning the old ones, updating electronic poll books, and training and outreach to county elections officials.