ATLANTA - The FOX 5 I-Team continues its investigation of the recent awarding of Georgia’s first-ever licenses to grow and sell medical marijuana.

Our I-Team found one of the winning applicants in Georgia was once a business partner with a medical marijuana operator who admitted he had earlier in his career — with a different company — paid a bribe to help get his medical marijuana license.

That bribe was paid before the two men became partners.

Now, some say Georgia’s Cannabis Commission should have known more about applicants' corporate history before they chose the winners.

It was big news, in a small city far away from Georgia. A jury convicted Fall River, Massachusetts Mayor Jasiel Correia for extorting hundreds of thousands of dollars from marijuana vendors.

The made-for-movies mayor was such a sensation he was the subject of a documentary, streaming now on The Roku Chanel while awaiting trial.

One of the key pieces of evidence in the case:  a $100,000 check written by the owner of a local medical marijuana company to a friend of the mayor. The check was written in 2016.

Brayton testified he was given "immunity" for the "bribe" if he testified truthfully during the mayor's trial.

What does all this have to do with medical marijuana in Georgia? While waiting to testify about paying that bribe, David Brayton changed the name of his company to Nature's Medicines, according to corporate records. He took on a new partner: Jigar Patel, a medical marijuana company owner out of Arizona.

Jigar Patel is now listed as CEO of Natures GA — one of only six companies to win a medical marijuana license here in Georgia. 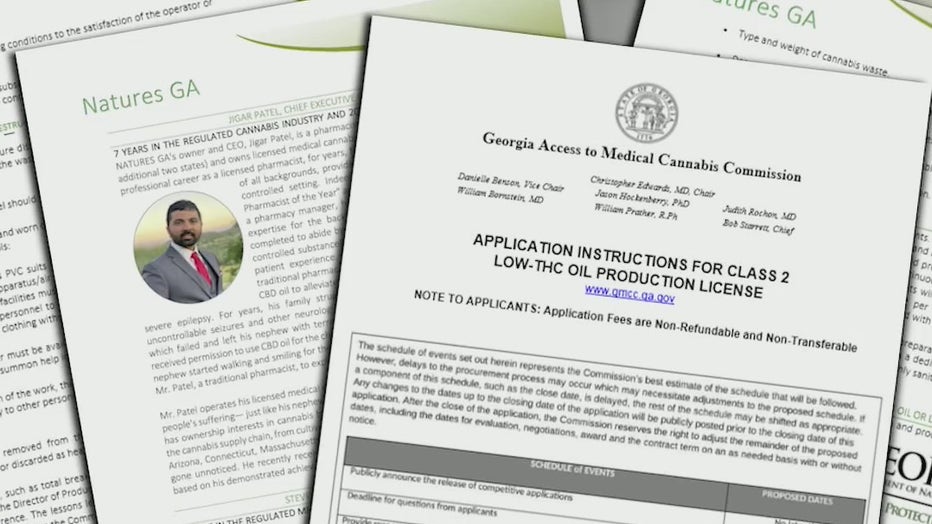 Natures GA, a medical marijuana company in Georgia, was affiliated with a business partner who admitted to paying a bribe for a license in a different state.  (FOX 5 Atlanta)

What should the people of Georgia think of that?

"They should be outraged," says Cumberland Curative co-founder Charlie Arnold.

Arnold's company is one of the losing companies bidding on a medical marijuana license in Georgia. They filed an official protest calling the bid "riddled with substantial errors" "unfair," and "plainly arbitrary." He was surprised when I told him we found no mention of Jigar Patel's business relationship with David Brayton on Natures GA's application.

"I think that's another huge concern even if it wasn't disclosed to the commission, they should still have figured this out," said Arnold

This is what the Georgia Access to Cannabis Commission never learned. Public records show in 2018 while waiting to testify about bribing a city official, David Brayton partnered with Jigar Patel, out of Arizona, to operate medical marijuana stores in Massachusetts.

They worked together under the new company name Nature's Medicines until 2019, according to corporate records.  Brayton testified during the bribery trial this year that "he sold his shares of the company" because of the bribery case.

Brayton's lawyer said his client would "not comment" and that Brayton, to his knowledge, is "not a part of the company (Nature's Medicines) anymore."

Jigar Patel's spokesperson wrote to say, "Questions regarding a previous business associate of Nature’s Medicines are irrelevant to our Georgia proposal because the company separated ties with that individual long before our Georgia application was submitted.

The state of Georgia’s medical marijuana application only asks if a company owner has ever been arrested or prosecuted for a "felony, or any misdemeanor" or had their license "revoked, suspended, or fined."  So, Jigar Patel did not have to report or explain his business relationship with David Brayton.

"The citizens of Georgia should be demanding answers right now, an explanation for how this happened," said Arnold.

Another winning applicant is Trulieve, out of Florida.  The company's CEO Kim Rivers is married to a man recently convicted of public corruption charges in Florida. During the trial, her husband JT Burnette testified he was "actively involved in opening up" Trulieve with Rivers.

Charlie Arnold says none of this is good for the public’s confidence in the bid process. He says the real victims are the parents of children who desperately need medical marijuana.

"I couldn't imagine being one of those parents and watching this, what is going on right now," said Arnold.