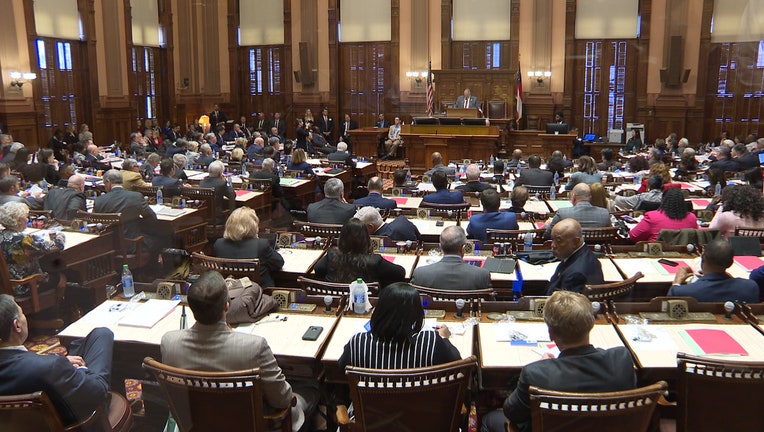 ATLANTA - The 2020 legislative session officially got underway Monday at the Georgia State Capitol.

The first day of the 40-day session is largely symbolic.  Both the Senate and the House of Representatives took time to remember the lives of colleagues who passed away before the session began.

Speaker David Ralston took to the well of the House of Representatives to remember the life of House Rules Chairman Jay Powell, who passed suddenly at a lawmakers retreat in November.

The opening to the 2020 Georgia Legislative Session

After adjourning for the day, Lt. Gov. Duncan met with the media to outline his priorities for 2020.  He said his primary focus will be on improving education and healthcare for Georgia's 11 million residents.

"We've got a lot of big ideas this year we want to get across the finish line," said Duncan.  "Some of the things you''ll see from us in healthcare will be price transparency and also the right to shop.  We're going to continue to work in ways that allow us to really build a system in this state that allows consumers or patients to know how much their healthcare costs well before they get home from the hospital."

Senate Minority Leader Steve Henson, D-Stone Mountain, said the Democrats will work with their counterparts on the issue of surprise medical billing, but also hope to keep the conversation alive about full Medicaid expansion.  That is not part of the healthcare waiver proposal that Governor Brian Kemp's administration submitted to the federal government at the end of 2019.

"We're going to continue to for 100% expansion of Medicaid going to 138% of poverty to cover hundreds of thousands more people than the Governor is talking about covering," explained Henson.

Gambling may be off the table for Georgia Legislative session

The Georgia Legislature may have just tabled gambling for the year.

Don't Bet on It

While the idea of expanding gaming in Georgia to include horse racing, casinos and sports betting has gotten a lot of attention in the months leading up to the session, members of the Senate said Monday it is not something they have much interest in pursuing.

"Any senator can introduce any piece of legislation and so, I can't speculate on something that may happen and I've seen varying numbers on what that return would be," said Sen. Mike Dugan, R-Carrollton.  "It's not one of our priorities."

Supporters believe gaming could help bolster Georgia's tax revenues in a time when the Governor has called for budget cuts, but Sen. Henson said he is not sold on the idea.

"I just want people to be informed that that's not going to be a cure-all.  We're not going to get enough money from gambling sources to change much in the state budget," Henson explained.  "You know, if more money comes into the casino, it means money is being taken out of some other area of the economy.  You know, a dollar bet at a casino is a dollar coming out of Ace Hardware.  So, that money's just not created."

At a meeting with reporters last week, House Speaker David Ralston said lawmakers should at some point let voters decide.  This year, however, the required Constitutional Amendment does not appear destined for the ballot.