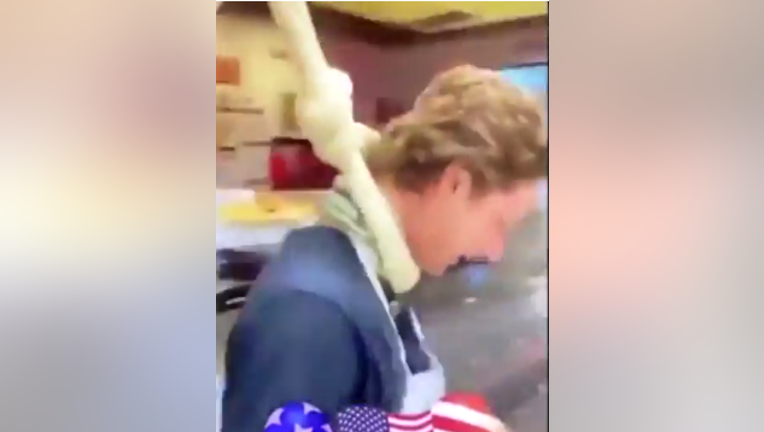 In this photo taken from the video a Woodstock Jimmy John's employee is seen with his head in a noose made out of bread dough. (Courtesy of TMZ)

WOODSTOCK, Ga. - Four employees of a sandwich shop in Georgia are out of a job after they were fired for making a noose out of bread dough and filming themselves playing with it.

The video, which was originally posted on Snapchat with a "Happy 4th of July" filter, was reposted to Twitter on Sunday. It shows an employee at a Jimmy John's in Woodstock, Georgia putting his head into a dough noose that another employee is holding.

Two other employees filmed the incident, with one of them seen on camera making jokes about the situation.

“In Woodstock, GA at a Jimmy Johns, some white employees made a noose, look at the DETAILS in the damn noose dough that’s used for sandwiches," the Alabama Twitter user who shared the footage said. "Crazy. They done this before....”

Customers threatened to boycott the shop over the incident and voice their anger over on Yelp.

Responding on Twitter, Jimmy John's condemned the video and called it "unacceptable."

“As soon as we were alerted to the video, we notified our franchisee, who quickly investigated and terminated all employees involved,” the sandwich chain said.

The chain also said that representatives would be meeting with the franchise's team to "prevent anything like this from ever happening again.