The State Ethics Commission found probable cause that two nonprofit groups in 2018 raised and spent millions to support Democratic candidates, including Abrams.

Under Georgia law, groups campaigning for candidates must disclose how much they raise and how they spend it.

Critics said politics is at play.

Emadi is pleased the commission voted to proceed with the campaign finance case against a nonprofit organization founded by Abrams.

"We think it’s good for Georgia voters to know who is bankrolling their elections and how they are trying to influence them," Emadi said.

However, the chairman of that nonprofit New Georgia Project, Francys Johnson, said this is all election year game playing

Reporter: "Are you saying all this is political?"

Johnson: "I'm saying this is off-off-off-Broadway. In the smoky halls of this legislative building, a predestined conclusion was reached today."

The State Ethics Commission staff filed a complaint against a nonprofit group founded by Abrams called New Georgia Project and a second nonprofit group the commission called a separate but affiliated organization, the New Georgia Project Action Fund.  The complaint alleges the two non-profits raised and spent some $7 million in support of a slate of Democratic candidates including Abrams during the 2018 gubernatorial election. 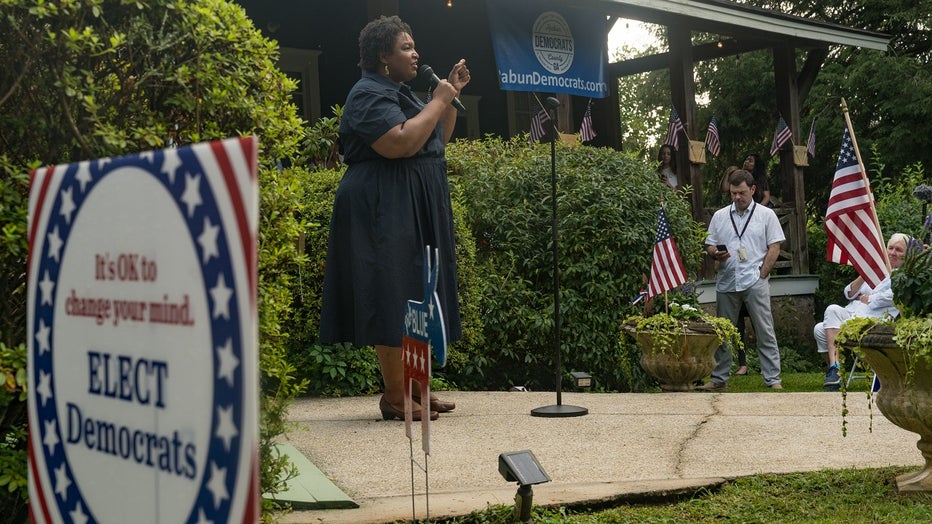 Georgia gubernatorial candidate Stacey Abrams speaks to supporters and members of the Rabun County Democrats group on July 28, 2022 in Clayton, Georgia. Abrams is running against current Georgia Governor Brian Kemp the election is to be held on Novem

New Georgia Project lawyer Aria Branch argued the two nonprofits are not required by law to disclose who donated to their nonprofits or what they spent money on.

"It's not that we are trying to hide who supports these organizations," said Branch.

"It comes down to canvassing, electioneering, phone banking, and texting and trying to influence voters," Emadi told reporters.

The commission appeared to agree, unanimously voting to find sufficient probable cause to continue the campaign finance case. A case, New Georgia Project Chairman Francys Johnson said they will be glad to battle.

"This is just a preliminary hearing. We still have to go through a hearing, and we're going to fight all the way,"said Johnson.

The case is headed for a full bench trial before an administrative law judge, but first, State Ethics Commission lawyers are expected to take depositions of key players.

One staffer told FOX 5, the case will more than likely not go to trial until after the election.