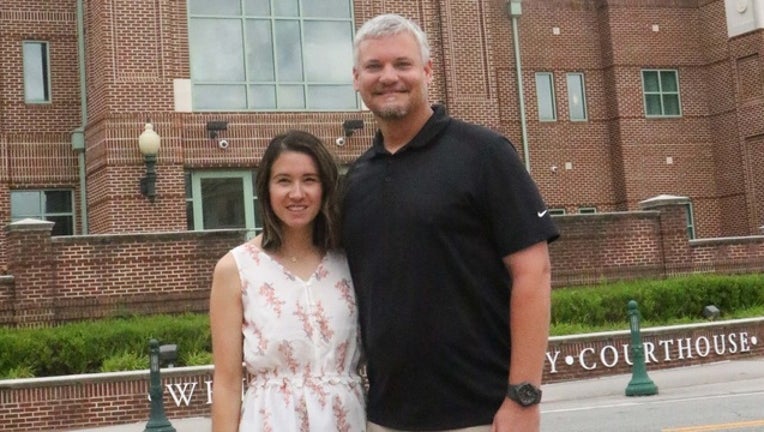 WHITFIELD COUNTY, Ga. (FOX 5 Atlanta) - It might have not been romantic and no one would ever call it a date, but a Whitfield County couple got to do something rare: serve on the same jury.

Rhett and Olivia Parrott are both very civic minded. Rhett is a driver’s education teacher and baseball coach at Dalton High School. Olivia is a counselor at Eastside Elementary School. And while both serve the community in those capacities, they have never before served on a jury, let along serve on a jury together.

That’s what happened last month as they responded to a jury summons to Superior Court Judge Jim Wilbanks, who was presiding over a civil trial.

“I can’t ever remember having a husband and wife summoned at the same time,” Wilbanks said. “And it just added to the rarity when they were chosen for the same jury.”

On Monday, June 17, around mid-afternoon, both found themselves beside 10 others listing to opening statements in a case of a plaintiff seeking damages for injuries in an automobile accident.

“We didn’t know what to expect,” Rhett said. “But I think there was a comfort level in each step because [court officials] did a good job for those of us who hadn’t been through the experience before of explaining what was going on -- whether it was the first room where you’re in with all the other jurors where they explained the process to us, to the courtroom and to the actual jury itself once that was picked. I feel like they educated us about the process throughout so we knew what to expect.”

The following afternoon, Parrotts and the 10 other jurors were wrapping up their deliberations and handing over a verdict.

“I think we were thorough, talked back through all the evidence that was presented and stuck to that,” Rhett said. “Everybody has their opinions, but I feel like we all did a really good job sticking to the facts that were presented and basing our decision on that.”

“After we made the decision, Judge Wilbanks actually came in and asked us if we had any questions and just took that time to personally thank each of us and look us each in the eye, not from across the room but right in front of us,” Olivia said. “I thought that was neat because I never had heard of a judge taking that time out just to come and talk to us and answer questions.”

Despite expressing apprehension in being qualified to serve as a juror, both said the process was quite painless and a little empowering. That’s why they were perplexed when they found out how many people actually respond to a jury summons.

“I was shocked,” Olivia said.

“We were all shocked,” Rhett said after being told only about 30 percent of the jurors report for duty each session – and it’s been going on like that for years. “I guess it’s one of those things – we’ve always heard it’s your civic duty, if called, to serve.”

“I don’t know the percentages, but I imagine back when I was growing up, I know my parents took jury duty very seriously so I imagine probably the numbers were 70, 80, 90 percent of the people showed up. I mean, that’s just what you did. It was like voting. It was not only an obligation, it was a privilege, part of our giving back to the community, giving back to society.”

“When you get down to the percentages being so low,” Wilbanks said, “that you don’t have enough people show up to have jurors for jury trails, then the result of that is we as judges can’t do our jobs.”

That’s one of the reasons the judge makes it a point to visit each jury after the trial to thank them and answer any questions they may have about the process.

“Did any of you notice all the people that didn’t show up?” Wilbanks asked jurors on June 17. “I always say, here’s my options, what do you want me to do about it? And this time they were pretty adamant – they told me you need to have the sheriff go arrest these people and bring them to court to be held responsible. And that’s probably the strongest response I’ve gotten in all these conversations I’ve been having now for at least a good three or four years.”

“As somebody who doesn’t deal with the law each day, getting to learn about the judicial system and see it in action was a good experience,” Olivia said. “To me, being a juror was a reminder of how lucky we are to live in a country that we do get to participate in and be a part of the judicial process.”