Georgia has been touted as a battleground state in the competitive 2020 election, and a new exclusive poll provided to FOX 5 suggests that President Trump will win Georgia by a close margin over former Vice President Biden. 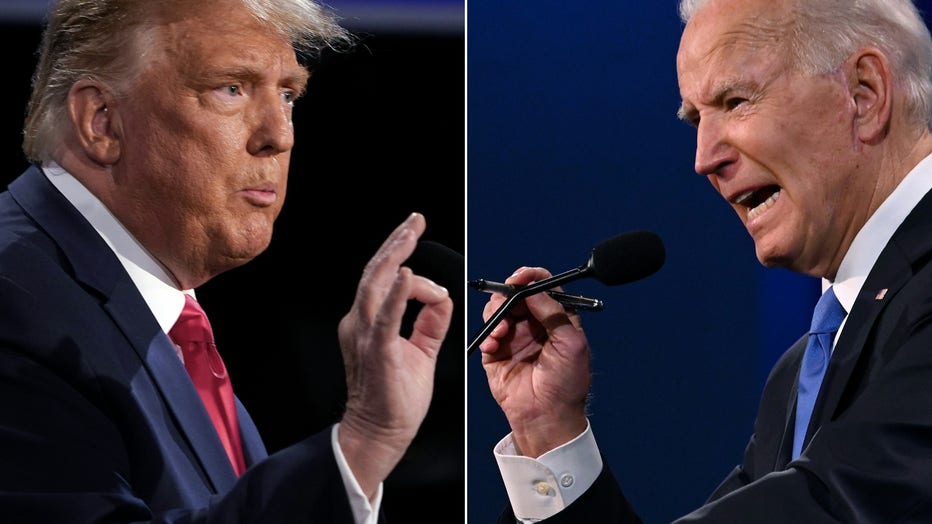 (COMBO) This combination of pictures created on October 22, 2020 shows US President Donald Trump (L) and Democratic Presidential candidate and former US Vice President Joe Biden during the final presidential debate at Belmont University in Nashville,

A poll from InsiderAdvantage shows that as of November 1, Trump will carry Georgia by 2 points of Biden.

According to the poll, Trump is polling at 48% in Georgia, giving him a two-point advantage over Biden who the poll suggests has 46% of the vote from likely voters.

"This poll is weighted to a maximum African American turnout level, which is an essential element for a Democratic victory in Georgia. That turnout currently is not in place through early voting but could develop on Election Day. Even with such weighting, President Trump enjoys a 2 point lead. All of this is within the poll's margin of error but based on years of polling Georgia correctly I would be surprised to see Trump lose Georgia. And if Republican turnout is strong on Election Day Trump might exceed his 2016 numbers in the state."

In the 2016 election, Trump carried the state by 5 percentage points. Georgia has not voted for a Democrat for president since Bill Clinton in 1992.

However, it is important to note other polls show just over a one-point spread between Trump and Biden.

Quinnipiac polling performed in October shows Biden with a 51% to 44% lead over Trump in Georgia among likely voters, while 4% remain undecided.

A New York Times/Siena College poll of likely voters in Georgia suggests a tie between the two candidates and says the race is too close to call.

The latest Emerson College poll finds President Trump leading Biden by less than a point, 49% to 48%. Among those surveyed 2% of voters plan to vote for someone else and 2% responded that they were undecided.

After weeks of early balloting, voters on Tuesday will finish deciding whether the state awards its electoral votes to Democrat Joe Biden or again supports President Donald Trump.

Also closely contested are two U.S. Senate races and House races in the 6th and 7th Congressional Districts in the Atlanta suburbs.

The Democrats have been pushing to bring Georgia into play as a swing state, sending numerous major party figures to the state over the last few weeks.

On Tuesday, Biden held two events around metro Atlanta - one in Warm Springs, Georgia and another at a drive-in rally in Atlanta.

The former vice president said there is "no state more consequential than Georgia when it’s comes to taking control of the US Senate."

President Donald Trump is also set to make another visit to Georgia just days ahead of the election in hopes of securing the state.

According to the Trump campaign, the president will appear at a rally at the Richard B. Russell Airport in Rome Sunday evening.