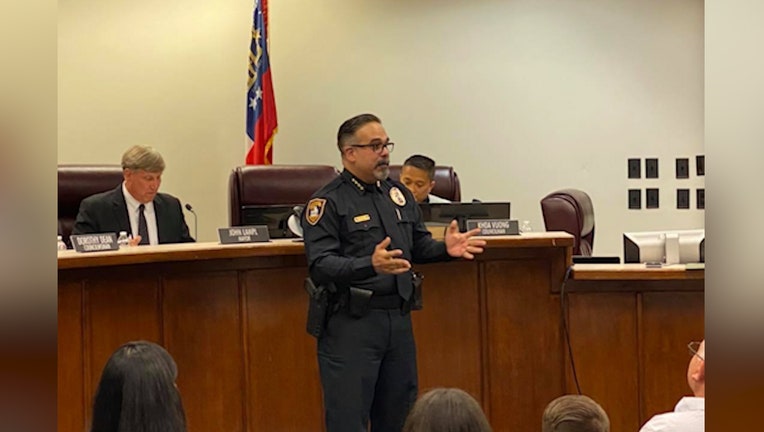 MORROW, Ga. - Chief Renan Lopez de Azuna was sworn in on Wednesday as the new police chief in the City of Morrow.

This job is a homecoming for Lopez, who grew up in Morrow.

He started his law enforcement career with Clayton County Police in 2003. At the time, he was just one of a handful of people in the department who spoke Spanish. He worked in homicide and criminal investigations during his time there.

He then decided to move back into a police department and become one of the members in the founding class of the Brookhaven Police Department.

"My policing, my philosophy, my ideas of community engagement all were formed by that environment in Brookhaven," Lopez said.

He started as a detective and eventually moved to a lieutenant with the criminal investigations division and then appointed major of uniform patrol division.

Lopez said his focus for the department will be on strengthening community engagement.

"I'm in a real unique situation here in Morrow where we have an excellent relationship with the community, and you can make an argument and say there is no need for a community engagement unit but I've never been that kind of person," Lopez said.

He said it's important now, more than ever to establish relationships between law enforcement and the residents.

He said there has been an evolution in policing over the last several years that focuses on mental health and working with the underserved populations.

"It's [community engagement] you fall back on when a critical incident occurs, It's what you fall back on when you're looking investigatively, when you need the help of the community," Lopez said. "To me, it begins and ends with that. It's at the very heart of what it means to be a civil servant.  It's a civic duty. It's not to be on an island. It's not us versus them."