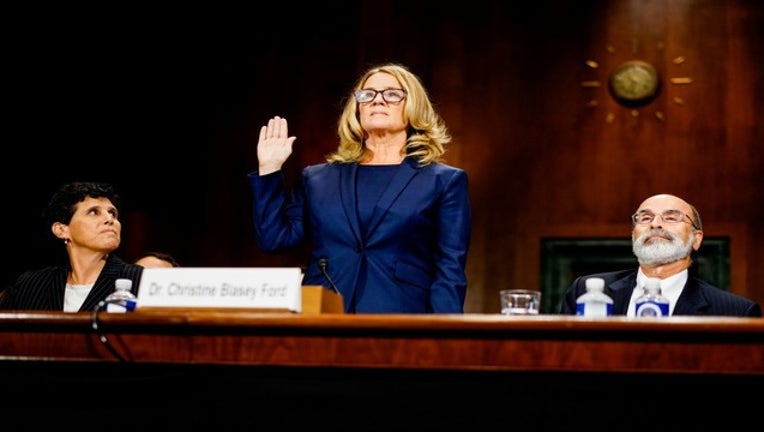 WASHINGTON (AP) - In a day like few others in Senate history, California psychology professor Christine Blasey Ford quietly recounted her "100 percent" certainty Thursday that President Donald Trump's nominee for the Supreme Court had sexually assaulted her when they were teenagers - and then Brett Kavanaugh defiantly testified he was "100 percent certain" he did no such thing.

That left senators to decide whether the long day of testimony tipped their confirmation votes for or against Trump's nominee in a deeply partisan fight with the future of the high court and possibly control of Congress in the balance.

Showing their own certainty, Republicans quickly scheduled a recommendation vote for Friday morning in the Senate Judiciary Committee, where they hold an 11-10 majority. They're hoping for a final Senate roll call next week, seating Kavanaugh on the court shortly after the Oct. start of its new term.

In the committee's packed hearing room for hour upon hour Thursday, both Kavanaugh and Ford said the alleged assault and the storm of controversy that has erupted 36 years later had altered their lives forever and for the worse - perhaps the only thing they agreed on during their separate testimony marked by a stark contrast of tone and substance.

Ford recounted for the senators and a nationwide TV audience her long-held secret of the alleged assault in a locked room at a gathering of friends when she was just 15. The memory - and Kavanaugh's laughter during the act - was "locked" in her brain, she said. Ford delivered her testimony with deliberate certitude, though admitting gaps in her memory as she choked back tears at some points and said she "believed he was going to rape me."

Hours later, Kavanaugh entered the hearing room fuming. He angrily denied her allegation, alternating a loud, defiant tone with near tears of his own, particularly when discussing his family. He decried his confirmation opposition as a "national disgrace." He interrupted senators and dismissed some questions with a flippant "whatever."

"You have replaced 'advice and consent' with 'search and destroy,'" he said, referring to the Constitution's charge to senators' duties in confirming high officials.

Democrats pressed the judge to call for an FBI investigation into the claims, but he would say only, "I welcome whatever the committee wants to do."

Republicans are concerned, among other reasons, that further investigations could push a vote past the November elections that may switch Senate control back to the Democrats and make consideration of any Trump nominee more difficult.

Trump made his feelings newly clear that he was sticking by his choice. "His testimony was powerful, honest and riveting," he tweeted. "The Senate must vote!"

Trump nominated the conservative jurist in what was supposed to be an election year capstone to the GOP agenda, locking in the court's majority for years to come. Instead Kavanaugh has seemed in peril and on Thursday he faced the Senate hearing amid a national reckoning over sexual misconduct at the top of powerful institutions.

The day opened with Ford, now a 51-year-old college professor in California, raising her right hand to swear under oath about the allegations she said she never expected to share publicly until they leaked in the media two weeks ago and reporters started staking out her home and work.

As Anita Hill did more two decades ago when she alleged sexual misconduct by Clarence Thomas, the mom of two testified before a committee with only male senators on the Republican side of the dais.

The psychology professor described what she says was a harrowing assault in the summer of 1982: How an inebriated Kavanaugh and another teen, Mark Judge, locked her in a room at a house party as Kavanaugh was grinding and groping her. She said he put his hand over her mouth to muffle her screams. Judge has said does not recall the incident.

When the committee's top Democrat, Sen. Dianne Feinstein of California, asked Ford how she could be sure that Kavanaugh was the attacker, Ford said, "The same way I'm sure I'm talking to you right now." Later, she said her certainty was "100 percent."

Her strongest memory of the alleged incident, Ford said, was the two boys' laughter.

"Indelible in the hippocampus is the laughter," said Ford, who is a research psychologist, "the uproarious laughter between the two."

Mitchell's attempt to draw out a counter-narrative - mainly that Ford was coordinating with Democrats - was disrupted by the panel's decision to allow alternating five-minute rounds of questions from Democratic senators.

During a lunch break, even typically talkative GOP senators on the panel were without words.

John Kennedy of Louisiana said he had no comment. Texas Sen. Ted Cruz said he was "just listening."

Then Kavanaugh strode into the committee room, arranged his nameplate, and with anger on his face started to testify with a statement he said he had shown only one other person. Almost immediately he choked up.

"My family and my name have been totally and permanently destroyed," he said.

He lashed out over the time it took the committee to convene the hearing after Ford's allegations emerged, singling out the Democrats for "unleashing" forces against him. He mocked Ford's allegations - and several others since - that have accused him of sexual impropriety.

Even if senators vote down his confirmation, he said, "you'll never get me to quit."

Kavanaugh, who has two daughters, said one of his girls said they should "pray for the woman" making the allegations against him, referring to Ford. "That's a lot of wisdom from a 10-year-old," he said choking up. "We mean no ill will."

The judge repeatedly refused to answer senators' questions about the hard-party atmosphere that has been described from his peer group at Georgetown Prep and Yale, treating them dismissively.

"Sometimes I had too many beers," he acknowledged. "I liked beer. I still like beer. But I never drank beer to the point of blacking out, and I never sexually assaulted anyone. "

When Sen. Amy Klobuchar, D-Minn., pressed if he ever drank so much he blacked out, he replied, "Have you?" After a break in the proceedings, he came back and apologized to Klobuchar. She said her father was an alcoholic.

Behind him in the audience as he testified, his wife, Ashley, sat looking stricken.

Republicans who had been scheduled to vote as soon as Friday at the committee - and early next week in the full Senate - alternated between their own anger and frustration at the allegations and the process.

"You're right to be angry," said Sen. John Cornyn, R-Texas.

Sen. Lindsey Graham, his voice rising in anger, called the hearing the "most unethical sham since I've been in politics."

This story has been corrected to say Kavanaugh would take his seat shortly after the start of the new court term.