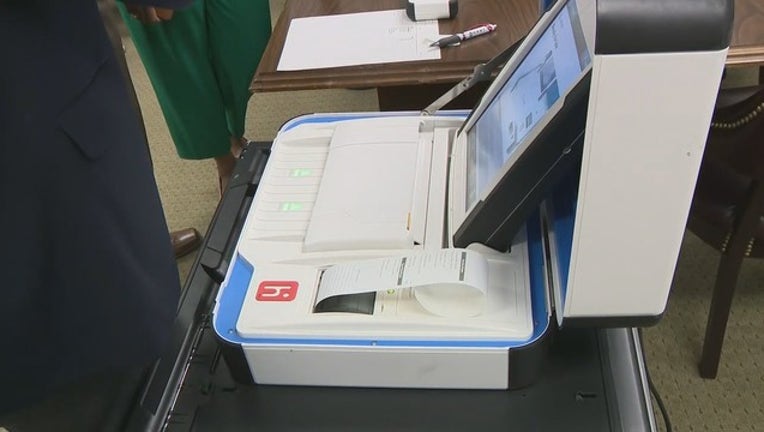 ATLANTA (FOX 5 Atlanta) - The clock is ticking for the state's new voting system to take effect.

One of the first pilot counties scheduled to use the new paper system is Paulding county where Elections and Registrations Supervisor Deidre Holden is leading the way into the new system.

"This is what the old system is," she said as she showed FOX 5 News a couple of older previous paperless voting machines which were used in Georgia for 17 years.

But problems at the polls during November midterm elections, like malfunctioning machines and unverifiable results, pushed Georgia Lawmakers to approve a new touchscreen system that prints paper ballots.

"They can actually hold that ballot, they can see who've they selected and then they can deposit it into the ballot box. Then we can audit that to make sure that their vote counted in the way they wanted it to count," said Holden.

Holden showed FOX 5 News the new vendor's video. It shows set up of the new machines, the voting process, which looks pretty much like before and the paper ballot being printed, the new part.

"Because nothing is going to be web-based and that's the thing about it," said Holden.

She said ballot boxes will be moved from the precincts to centralized locations in possession of two people.

"Most of the time they do have a Sheriff's deputy with them, so it will not be out of the sight, it will not ever be in the possession of just one person," said Holden.

MORE: Judge could order Georgia to use paper ballots in fall elections

She said Paulding County is among a dozen pilot counties first to be implemented the new system which cost taxpayers $106 million.

Holden said the pilot counties will use the new machines during the November elections this year before the rest of the state implements them next year.

She also stressed that voters need to educate themselves on the new paper-based system.

Click here to learn more about the new voting system.