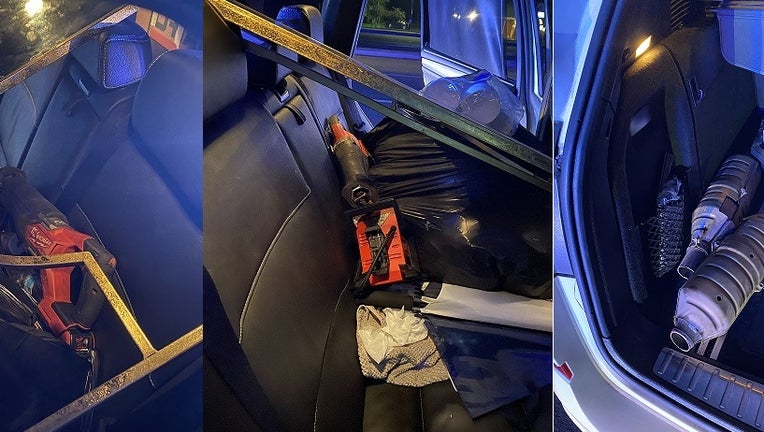 Police allegedly found a red cordless saw in the back passenger seat and two catalytic converters that appeared to have been sawed off in the trunk of the car. (Photo: Duluth Police Department)

Police said Kimberly Joya, Justin Feliciano-Onofre and David Lopez are charged with entering auto and possession of tools for the commission of a crime, claiming they were using those tools to take valuable parts off of cars parked on Pleasant Hill Road in Duluth.

Officers responded after receiving a call that suspects breaking into cars left an area in a white BMW SUV.

Officers located the car and pulled the car over. The responding officer used the squad car's intercom to ask the occupants of the car to put the car in park and put their hands out of the windows. One by one, the passengers of the car, cuffed them and detained them on the curb.

The responding officer reported they searched the car and found a red cordless saw in the back passenger seat and two catalytic converters that appeared to have been sawed off in the trunk of the car. The blade of the saw found from inside the car was still warm, police said, indicating it had just been used.

Police found a matching blade in one suspect's sweater. Another one of the detained suspects confessed to stealing the converters, allegedly saying in Spanish, "it was me I needed some extra cash I took the items [the converters] inside the car."

A witness from the scene identified the suspects, the police report said.