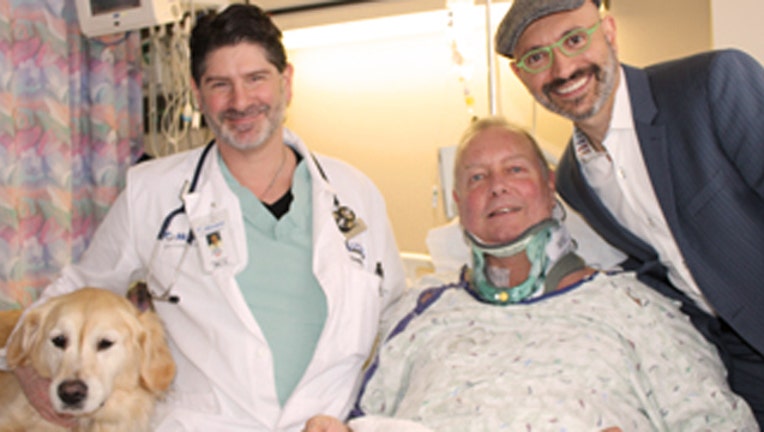 While most of Michigan and the country were out celebrating on New Year's Eve, a northern Michigan man was lying in the snow - paralyzed after he slipped and fell. But his faithful dog saved his life.

The man, known only as Bob, was watching football on New Year's Eve and waiting to watch the ball drop. When his game went to commercial, he ran out to get some wood for his fire.

He was wearing only long johns, slippers, and a shirt for the 15 foot walk. Suddenly, he slipped and fell - breaking his neck.

He doesn't have any close neighbors so when he was yelling for help, the only help he got was his best friend: Kelsey - his Golden Retriever.

"I was screaming for help but my nearest neighbor is about a quarter mile away and it was 10:30 p.m., but my Kelsey came," Bob told McLaren Hospital. "By morning my voice was gone and I couldn't yell for help, but Kelsey didn't stop barking."

Temperatures dropped to 24 degrees that night and there was Bob, lying in the snow - with Kelsey by his side.

He said she kept him warm by lying on top of him. She also licked his face and hands to keep him awake.

"She kept barking for help but never left my side," Bob said. "She kept me warm and alert. I knew I had to persevere through this and that it was my choice to stay alive."

"She was letting out this screeching howl that alerted my neighbor. He found me at 6:30 p.m. on New Year's Day."

According to McLaren Northern Hospital, who told Bob's story, he was hypothermic, with a core body temperature under 70 degrees Fahrenheit, in atrial fibrillation, and had a C4-C5 disc herniation.

The disc herniation was in his neck and was compressing the spinal cord, causing weakness or paralysis in his legs.

The emergency department worked to stabilize him and get him to start healing. Bob said it was Kelsey who saved his life that day.

"I was surprised to find out that I didn't have any frost bite," Bob said. "I am sure it was because of Kelsey's determination to keep me warm and safe."

The good news, he's already got use of his extremities, according to Chaim Colen, MD, Neurosurgeon at McLaren Northern Michigan.

"I immediately took the patient back to the operating room for decompression of his spinal cord and stabilization. After the surgery, miraculously, he started to move his extremities with greater strength."

Since the surgery, Bob is motivated to heal and get back to his farm. He will need intense physical and occupational therapy to regain strength and function - but he is on the road to recovery, all thanks to his heroes.

"Kelsey kept me warm, alert, and never stopped barking for help. Dr. Colen saved my life and ability to move. They are truly heroes and I will be eternally grateful."