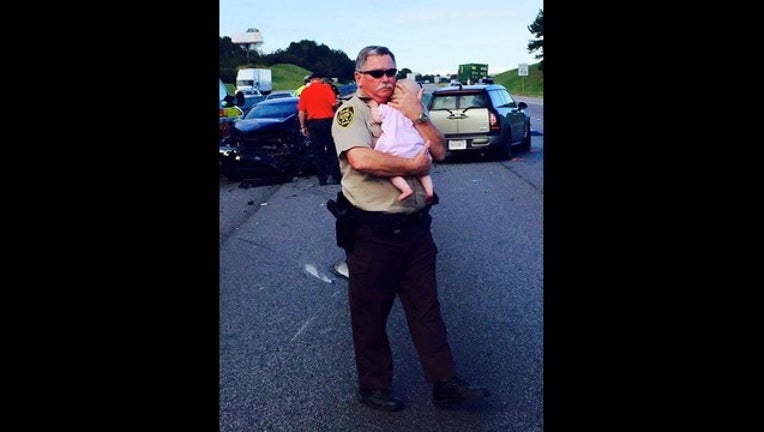 Carol Robinson - AL.com: A rush-hour crash snarled traffic on Interstate 20 near Leeds this morning, but authorities say there were no serious injuries. The crash happened about 7:50 a.m. near the Bass Pro Shop. Alabama state troopers said the accident involved an ambulance, a tractor-trailer and three passenger cars.

But it was a moment of humanity, a quick photograph of Jefferson County Sheriff's Deputy Ric Lindley, as he comforted a baby that has people around the world talking. Within hours of it being posted to social media, it had been shared over a half a million times.

Lindley later told reporter Carol Robinson of AL.com that he loves kids, all kids. And that it was only natural for him to help a shaken up mother with her infant.

"I asked if she was OK,'' he said. "She was pretty well shaken up, so I asked her if I could hold the baby."

"The baby was fine because she had been buckled in a car seat, but she was upset to start with,'' Lindley said. "After I held her and walked a bit, she quieted down. I recalled my days as a young father, and young grandfather, and I put those skills to work and calmed the baby down. She had a very sweet little personality."

Lindley reportedly held the baby for a good hour and a half while the babies mom got herself together after the accident.

"I wanted to give her mother time to regain her composure. She's a young mother, and this was probably extremely traumatic for her. She was having a rough time from an emotion standpoint."

He has said he's no hero but his boss, Sheriff Mike Hale, claimed this is just another example of the good men and women working for the department.

(Pictured above: Jefferson County Sheriff's Deputy Ric Lindley comforts a baby at a morning wreck scene on Interstate 20 near Leeds)