A popular DeKalb County spot is going out with a bang

DEKALB COUNTY - Monday, the owner of Napoleon's Restaurant in Oak Grove was forced to cease operations, laying off his entire staff and warning his clientele that if things don't turn around soon, the situation could become permanent. Last week Sean Keenan, the owner of Napoleon's, created a temporary drive-thru in order to try and stay in business during the downturn created by the COVID-19 restrictions.

“We decided it was just better for us to close down completely,” said Kennan.

After a decade of feeding and entertaining the Oak Grove community in DeKalb County, Keenan says the end could be near. 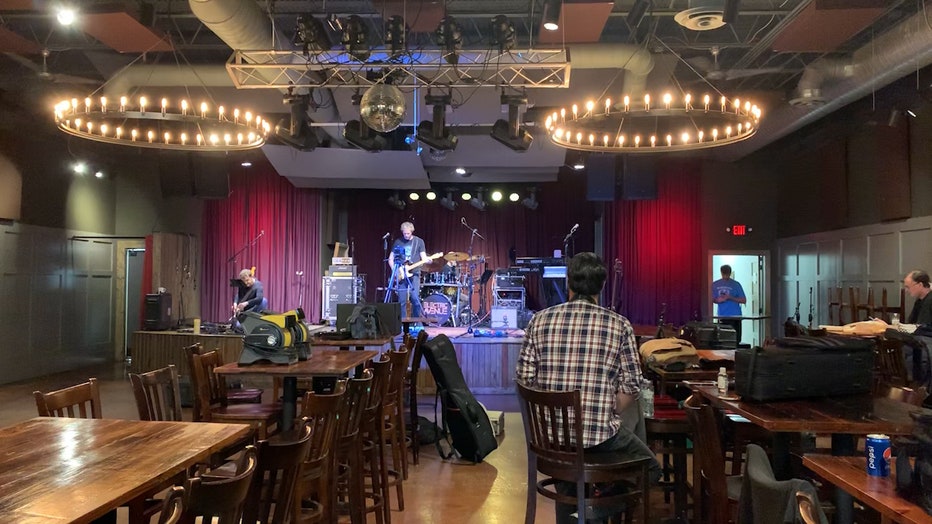 But the beat went on for at least one more night at the restaurant's unique event space called the Vista Room.

“There’s a lot of people that are under attack for not being able to keep up the business, and so we’re trying to shine a light on people’s hearts in the only way we know how, which is music,” says Kevin Spencer who is the lead singer for the 80's tribute band called Electric Avenue. Spencer's band performed a concert Monday night in an empty room but broadcast to over 1,000 fans on Facebook.

“We’re keeping our social distancing of 6 feet apart from each other,” says Spencer. “It’s the only time we’re coming out of our homes, so we can do this. So we can benefit some of the staff here as well as to benefit the musicians that are involved,” he added.

Electric Avenue played their 80's hits for well over an hour, accepting donations for organizations like The Giving Kitchen which supports restaurant staff from around the metro Atlanta area.

“There are no rules. We haven’t experienced this as a race in 98 years since the Spanish Flu and Cholera and the rest of it. So, it’s like, I think we’ve got a learning curve here. But, the one thing that that sets this situation apart from a lot of other things is the fact that we’re all in this together,” says Spencer.

Spencer and his bandmates were aiding the man who helped give the band their start seven years ago. Keenan offered up free rehearsal space for Electric Avenue at his restaurant.

“I live in this neighborhood as well. I was moved to tears when somebody started a ‘Save Napoleon’s’ Facebook page. When I saw that, I felt like I couldn’t quit...I couldn’t give up and I needed to keep trying,” says Keenan.

According to Spencer, the band generated nearly three thousand dollars for The Giving Kitchen from Monday night's concert. Spencer says that now his band will retreat to their homes to shelter in place and hope that they still have places to play like Napoleon's when the pandemic subsides.