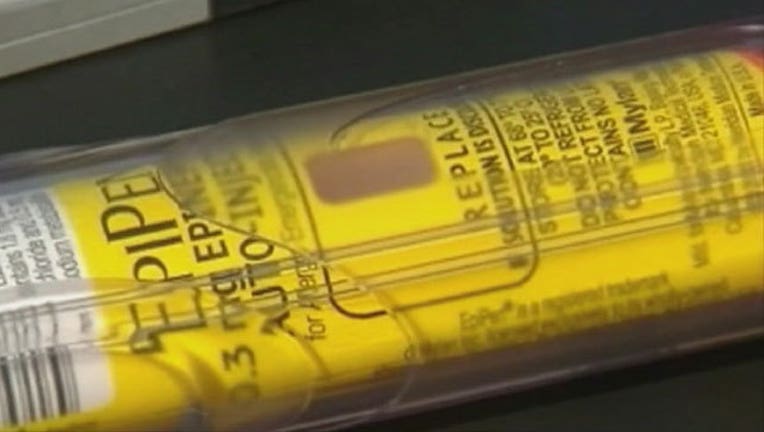 (AP) - CVS is now selling a rival, generic version of Mylan's EpiPen at about a sixth of its price, just months after the maker of the life-saving allergy treatment was eviscerated before Congress because of its soaring cost to consumers.

The drugstore chain says it will charge $109.99 for a two-pack of the authorized generic version of Adrenaclick, a lesser-known treatment compared to EpiPen, which can cost more than $600.

CVS Health Corp., the nation's second-largest drugstore chain, says it cut the price it charges for the generic version of Adrenaclick nearly in half. The lower price is now available at all CVS stores. The chain runs about 9,600 retail pharmacies in the United States, including several locations inside Target stores.

These treatments are stocked by schools and parents of children with severe allergies. They are used in emergencies to stop anaphylaxis, the potentially fatal allergic reactions to insect bites and stings and foods like nuts and eggs.

The syringes are filled with the hormone epinephrine, and they expire after a year. That often forces patients to fill new prescriptions even if they never used the old one.

Mylan NV started taking heat late last summer for its EpiPen pricing, which has climbed more than 500 percent since 2007. A Congressional panel grilled CEO Heather Bresch in September about the soaring cost, which she has blamed in part on insurers, pharmacy benefits managers and other middlemen that stand between the drugmaker and the customer.

Bresch is one of several pharmaceutical executives who have been called to Congress, where both Republicans and Democrats have demanded explanations for spiraling drug prices, which can plunge patients into debt or force them to skip prescriptions.

President-elect Donald Trump said Wednesday during a press conference that he wants to create new bidding procedures on drugs to save money.

Shares of most drugmakers sank almost immediately and are still under pressure today, though the decline in Mylan's stock outpaced most. Shares fell almost 2 percent in early trading after the CVS announcement.

In the aftermath of the unwanted attention, Mylan has expanded the financial aid it offers customers and launched its own authorized generic in December, priced at around $300 per two-pack.

But patients with no health insurance or plans that make them pay a high deductible before covering care are exposed to the full price of the drug if they aren't aware of that assistance or if they don't seek it.

CVS says the new price it is charging for the Adrenaclick generic applies to both insured patients and those who pay cash without coverage. It's what customers will pay at the pharmacy counter.

Prescription drug prices vary widely, due to negotiations between pharmacies, drugmakers and pharmacy benefit managers. The new price that CVS announced Thursday is lower, in some cases by more than $100, than other prices listed on websites like GoodRx that compare retailers.

The maker of Adrenaclick, Impax Laboratories, also offers a coupon program for its generic version that can provide additional price breaks, if a patient qualifies.